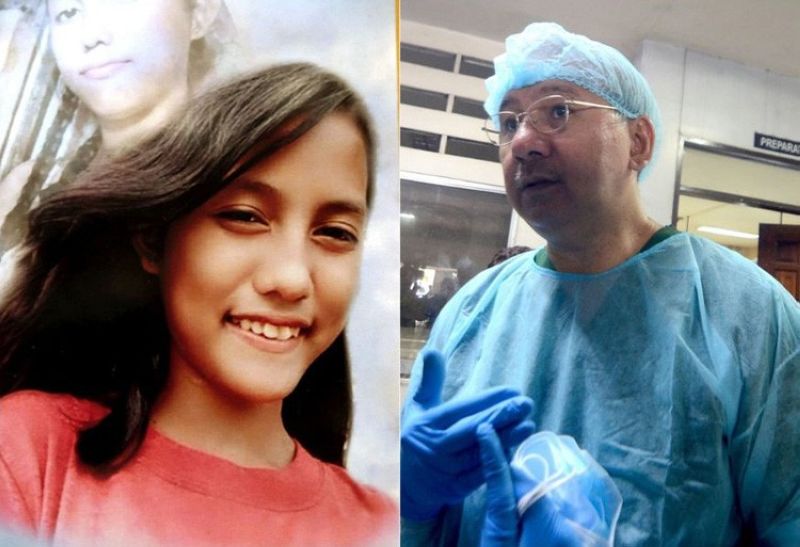 HE forensic examination conducted by the Public Attorney’s Office (PAO) showed that 16-year-old Christine Lee Silawan was strangled, tied, raped and her face scalded with acid.

Dr. Erwin Erfe, PAO’S forensic pathologist, said a re-autopsy was conducted on Silawan’s remains on March 22 upon her mother’s request.

Erfe said they examined her head, hands and genitals to determine if she had been raped.

Forensic examiners use macro lenses to blow up the images of injuries.

All of the findings, Erfe said, were photographed and videoed and would be presented in court as additional evidence.

Findings on the genital examination showed extensive and massive abrasions on the labia majora, or the outer folds of the vagina. Second degree lacerations and hematomas, or swelling due to blood clots, were also found inside her private parts, indicating forcible penetration.

Erfe said they did not recover any seminal fluid but the local crime laboratory collected samples during the first examination on Silawan’s body.

He clarified that they could not determine how many times Silawan was violated, based on her genital injuries.

The injuries in her vagina were fresh, about six hours before she died, Erfe said.

Meanwhile, Erfe said the teenager was already dead when her facial skin was removed.

He said there was a possibility that sulfuric acid was used.

Erfe said an animal might have ripped out her tongue and the esophagus when she was dumped in an open area in Barangay Bankal, Lapu-Lapu City.

He said there were indications that Silawan was strangled with a rope. A right hand print was visible on the left side of her neck.

Deep rope marks on her wrists also indicated that she was tied and she struggled to set herself free.

At least three persons were involved in her killing, based on the wounds on her body, he said.

In a related development, Lapu-Lapu City Police Office Director Limuel Obon said they were in the middle of a parallel investigation with the National Bureau of Investigation (NBI) 7 to arrest the remaining suspects in Silawan’s murder.

Obon told reporters that the Special Investigation Task Group tasked to solve the murder had not been dissolved.

He urged the public to report to police if they had any information regarding the case instead of posting it on social media.

Obon’s concern came after his personnel received several messages and read posts on social media concerning suspicious personalities that they believed were involved in Silawan’s murder, including pictures of the area where she might have been killed.

But Obon said the information had yet to be confirmed, especially since those who posted the messages did not identify any suspects.

“I advise the public to avoid believing in messages being posted on social media. On our part, we are thoroughly verifying every information we receive to avoid arresting the wrong persons in the case. We want to make sure that once we arrest a suspect, it will be supported by evidence. Let us just wait until the long arm of the law will get them,” Obon said in Cebuano.

PAO Director Persida Acosta said they had been coordinating with Obon and the NBI 7 to consolidate their evidence.

The panel of prosecutors investigating the case is set to call a clarificatory hearing after the accused, Silawan’s 17-year-old ex-boyfriend, filed his counter-affidavit.

The boy is currently under home care by the Lapu-Lapu City Social Welfare Office. (From SuperBalita Cebu Correpondents Alan Tangcawan and GCM, JKV)