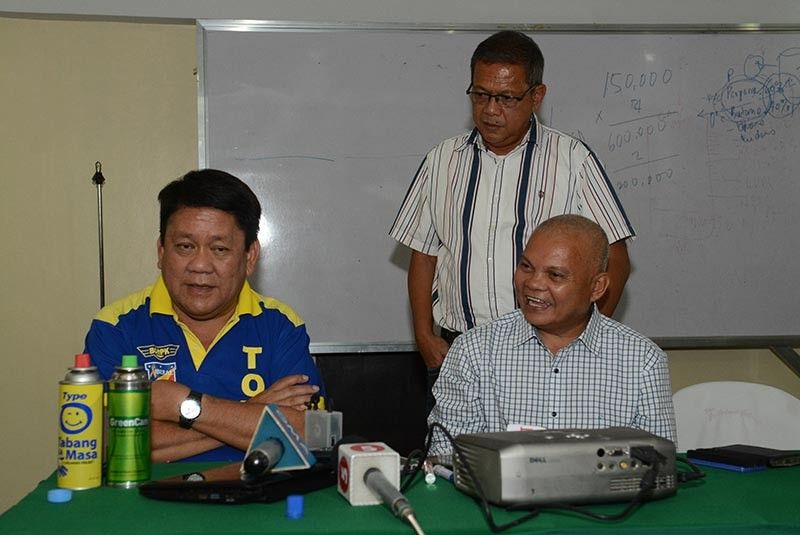 BUTANE REFILLING. In this 2015 SunStar photo, then congressman Tomas Osmeña (seated, left) joins a press conference called by a group of gas refillers in Cebu, among them Douglas Labra (standing) who has named him protector of butane refillers in a supplemental affidavit submitted to the Office of the Ombudsman to support the charge filed by the Cebu City Police Office against now mayor Osmeña over the release of arrested butane refillers in 2018. (SunStar file) 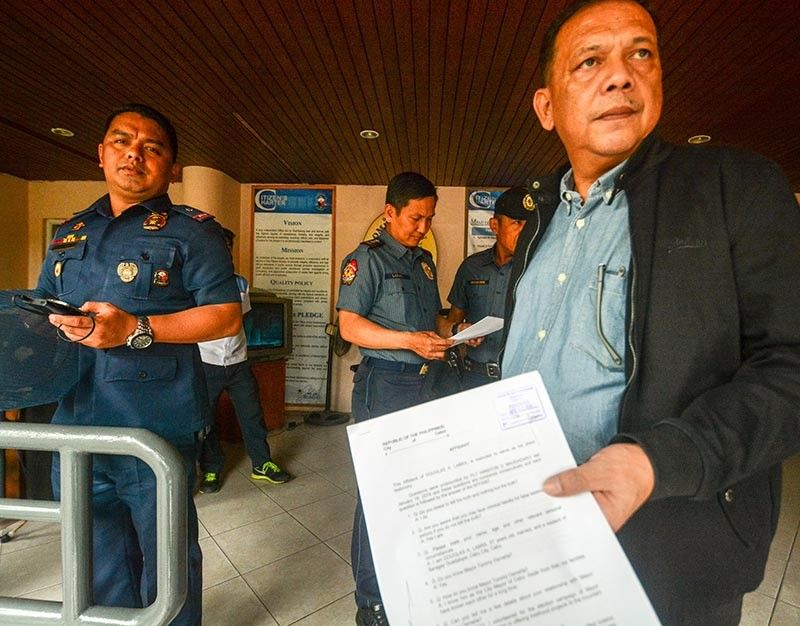 CEBU City Mayor Tomas Osmeña has been named “protector” of butane refillers by a former BOPK supporter who was once in the business of butane canister refilling.

Douglas Labra, a businessman who once supported Osmeña, named the mayor in an affidavit submitted to the Office of the Ombudsman Visayas to support the charges filed in 2018 by the Cebu City Police Office (CCPO) against Osmeña over the release of three men who were arrested and detained for selling butane canisters refilled with liquefied petroleum gas (LPG), an illegal act.

The CCPO has filed charges of obstruction of justice, grave abuse of authority, misconduct, and violation of Republic Act 6713, or the Code of Conduct and Ethical Standards for Public Officials and Employees, against Osmeña.

Osmeña, sought for comment, said he will answer the accusation in court but pointed out that in 2018 he had “stopped (Labra’s) abuses in the management of the V-hire terminal” in Barangay Kamagayan.

At the time, Labra managed the temporary V-hire terminal near Citilink. A report had reached Osmeña that Labra was not allowing personnel from the Barangay Mayor’s Office (BMO) to park at the V-hire terminal, prompting him to close it down, the mayor said.

Labra, in his affidavit, said the three butane canister vendors arrested were associated with Osmeña.

Osmeña’s explanation that he had taken pity on the three men and had them released from detention at the Parian Police Station was a lie, Labra said.

Labra said he knows firsthand about Osmeña being a protector in the butane refilling business. He said he had a dealer who had the butane canisters refilled at Shemberg in Mandaue City and that dealer had Osmeña’s protection.

“I know him because he was a customer of the refilling business which Mayor Osmeña owned. As customer, he would buy in bulk, by refilling varous re-used canisters with butane, before selling these back again to the market in retail and at retail prices,” Labra said.

Labra owned the Shemberg refilling station in Mandaue City that was raided by the Criminal Investigation and Detection Group in 2017.

Labra said the butane canisters with stoves bearing the sticker “Type O” that were given out during the 2016 elections belonged to Osmeña.

One of the three men arrested, Ramir Amaca, was the partner of his brother-in-law who ran the refilling station for butane canisters owned by Osmeña, Labra said.

The other two arrested were Romeo Appareca and Romeo Cuevas.

Labra said that it was public knowledge that the group of Osmeña, whom he called “Pundok Kataw- anan,” rode on the popularity of the butane canister business during the 2016 elections.

Labra said he had lent Amaca capital to put up the butane canister refilling business in 2015.

Amaca had sought his permission after Peter Vecitation, who allegedly was sent out by Osmeña’s son Miguel, offered to provide protection for his butane canister refilling business.

Labra said he pioneered the butane canister refilling business in Cebu City. Osmeña saw the business to be lucrative and made his own canisters. To keep his business going, Labra and Osmeña agreed that Osmeña would supply the canisters and Labra would refill them.

But ever since the CIDG raided his refilling station in September 2017, he let go of the business and had Amaca take over together with Miguel Osmeña, Labra said.

Labra also said that he submitted his supplemental affidavit only on April 2, almost eight months after CCPO’s filing of charges in August 2018, because he only found the time now.

His act was not politically motivated, Labra said.

It is, Mayor Osmeña said.

“Of course. He was having the V-hire drivers get gas from a specific gas station. He opened up a vegetable market and made the drivers use his eatery,” the mayor said when SunStar reached him for comment.

“I can only tolerate so much. Just because he was BOPK, he thinks he can lord it over. The final straw was when he kicked out a City Hall vehicle because he needed it for his friend. Got no regrets,” Osmeña said.

In the Nov. 13, 2015 issue of SunStar Cebu, members of the Cebu LPG Budget Gas Industry Player Association, including Labra, held a press conference to ask the Department of Energy (DOE) to provide standards for their business.

Also present during the group’s forum that day was Osmeña, who was still congressman for the south district at that time.

In the presscon, Osmeña asked the public to patronize the Type O butane canisters because these complied with safety standards.

“I encourage the public to buy Type O butane because its canister is brand-new and safe, and it’s cheaper because it was designed to help the poor,” Osmeña said at the time. (MPS from reports of AYB of SuperBalita Cebu and RVC of SunStar Cebu)