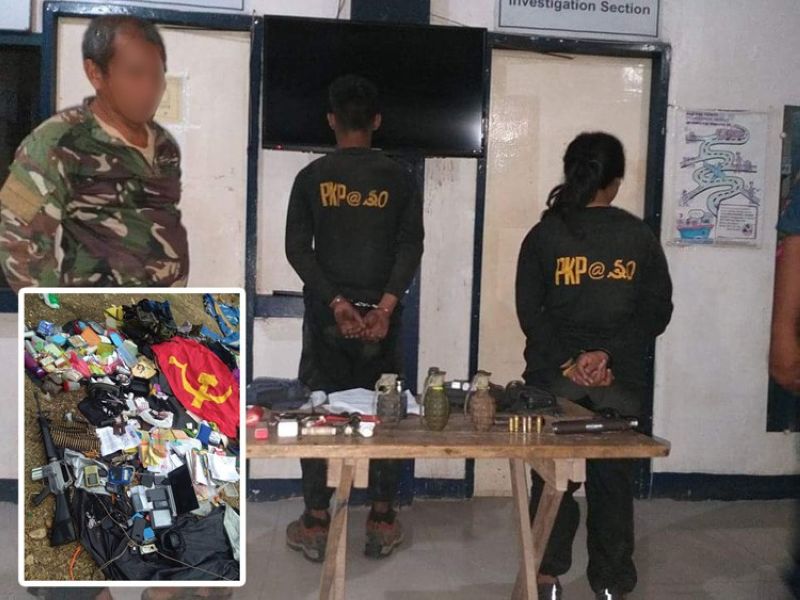 AN ALLEGED leader of the New People’s Army (NPA) and two other members of the group were arrested by military troops, following reports of the presence of armed men in Barangay Tampalon, Kabankalan City, Negros Occidental Monday night, April 1.

The 303rd Infantry Brigade (IBde) of the Philippine Army identified the leader as Abraham Villanueva with aliases “Tikboy” or “Gamay,” of Barangay Dancalan, Ilog town. He is the alleged front secretary of South West Front or the NPA in the areas of Candoni, Hinoba-an, Ilog, Cauayan, Kabankalan, and Sipalay or known as the Chicks area.

Villanueva, based on reports, has criminal cases for arson, murder, and frustrated murder.

Magbanua is an alleged finance and logistics officer of Platoon 1, SWF while Villarojo is a member of the same platoon.

Brigadier General Benedict Arevalo, commander of the 303rd IBde, said the arrest of Villanueva has a big impact on the leadership of the NPA.

He is a veteran fighter and is supposed to be due for promotion as deputy secretary of the group’s regional command after the arrest of National Democratic Front consultant and secretary Francisco “Ka Frank” Fernandez, Arevalo said.

The suspects were wearing black NPA sweatshirts printed with Partido Komunista ng Pilipinas @ 50 and black jogging pants when they were arrested.

The Army recovered from them a .45 caliber pistol, a magazine and five ammunition of the said firearm, and three hand grenades.

As an offshoot to the arrest of the three rebels, troops of the 15th Infantry Battalion who were conducting pursuit and combat operations, encountered about 20 suspected NPAs in the said village at 5:50 a.m. of the following day.

The clash lasted for 20 minutes.

After the armed clash, the NPAs withdrew towards the direction of Sitio Amian Ilawod of the same barangay, leaving behind some war materials such as an M16 rifle and its magazine, 175 rounds of 7.62 link, 20 ammunition for M16 rifle, and 21 ammunition for AK47 rifle.

Also recovered from the encounter site were two cellular phones, a tablet with charger, a netbook, a storage device for laptop, a transistor radio, a binocular (pentax), medical kit, blood pressure apparatus, list for NPA extortion activities, and other subversive documents.

Nobody was hurt on the government side while several casualties were reported on the NPA side based on the bullet marks found on the rebels’ abandoned shirts.

The 15th IB continues to conduct anti-criminality and anti-terrorist operations to ensure the safety of the people from extortion and destruction of the communist rebels for peace, progress and development in the province.

Lieutenant Colonel Patricio Tomales, commander of 15th IB, in a press statement, said he is calling the people particularly from the sixth district under his area of jurisdiction to continue provide information and support the government forces fight terrorism and criminalities brought by the rebels.