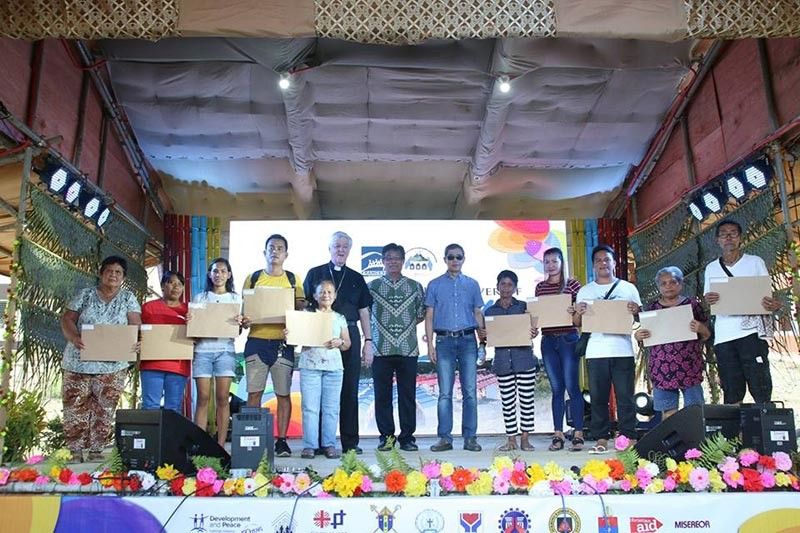 LITA Bagunas, 56, said the government ignored their land and shelter demand after they were hit by Super Typhoon Yolanda on November 8, 2013.

“We were harassed and intimidated because we’re only a small voice,” said Bagunas, a community leader in Eastern Samar.

“At first, we were forced to accept the ‘substandard housing’ they built for us. But now, our voices and initiatives are being heard because of Development and Peace and Rights Network,” she added.

Florina Reyes, the project coordinator of the non-governmental organization Rights Network, said their partnership with Canadian Catholic Organization for Development and Peace, or Caritas Canada has “boosted” their capabilities in working out for the distribution of certificates of land ownership (Cloas) to five towns in Leyte, the hardest hit province during the typhoon.

“The certificate of land Cloas had been handed out over a two-year period that we worked on those,” said Reyes, adding they are only looking at more than 900 Cloas to date.

“Even if Development and Peace and Rights Network belongs to a different organization, we also have the same advocacy for the poor and landless, specifically for the Yolanda victims,” said Reyes, who started working in the devastated areas in Leyte and Eastern Samar in 2014.

“We are able to push for reforms. Even if not fully implemented, at least we are able to surface the issues,” added Reyes, whose group is part of the Community of Yolanda Survivors and Partners.

With the partnership of Development and Peace, Reyes said they saw “positive result” in their works.

Benilda Madronero, a farmer in Barugo, Leyte, also thanked Development and Peace for helping her as they fight for the rights in their three-hectare land.

Like other farmer beneficiaries, Madronero received sustainable livelihood projects, skills-training support in organic farming, and farm tools so they can work again on their farm.

Since 2015, Rights Network and Development and Peace continued with the rehabilitation, shelter and land rights of the typhoon victims.

Catholic priest Randy Raagas reiterated that land rights “has been a problem in our country for a long time.”

“The evil triumphs when the good men do nothing. If we think we are on the right side, we are on the side of God. This is our right not only to survive but our right to live,” said Fr. Raagas in Carigara during his mass for social justice.

He added that the government should support the rights of the farmers while he criticized those “who have land but want to grab more.”

Danny Carranza, the former national coordinator of Rights Network, said they started laying down their works in land rights movement in 2008, covering 14 provinces across the country.

However, they looked at the land issues in Yolanda-hit areas as “special cases.”

Carranza said the non-distribution of Cloas to the “rightful farmers” hit by Yolanda caused delay and ineligibility in their access to shelter and livelihood assistance.

“During the Yolanda response, farmer-survivors were excluded from shelter and farming assistance by various humanitarian organizations and government agencies due to lack of tenurial document to evidence land ownership,” the group said in its investigation.

According to the agrarian rights activist, the Development and Peace has shown its commitment to addressing existing shelter, land rights, and peace issues in the country.

“The support from Development and Peace, in partnership with Manitoba Council for International Cooperation, sustains the productivity of the farmers,” added Carranza, who also worked with other agrarian activists in the controversial Luisita Hacienda in Luzon.

“At the national level, their appreciation is that these certificates of land ownership are distributed already. But when you go to the ground, you will find out many problems,” he said.

He added the national government is not matching the land reform initiative.

Bishop Noel Simard, head of the Development and Peace Canadian Delegation to the Philippines, told the Yolanda victims that their help “is a manifestation of us in Canada responding to the great need and suffering you have experienced in 2013.”

“Development and Peace cannot help but respond in the best way we can despite the many difficulties we have to face in building the Pope Francis Village,” Simard said during the turnover of 263 new houses in Tacloban City.

The bishop was accompanied by Evelyne Beaudoin, president of the Development and Peace National Council, and other officials during their visit in February.

Simard, who is the bishop from Diocese of Valleyfield in Quebec, Canada and the president of the Quebec Bishops' Assembly, also acknowledged the desire of Yolanda victims to improve their condition through their “sense of community and solidarity.”

Sister Georgette Gregory of the Sisters of Saint Joseph in Toronto, Canada added they “continued to pray” for the survivors while saying that they admired their resilience.

“I am impressed how you’ve come together,” the nun said.

The construction of 566 “model” housing units and other support facilities at the Pope Francis Village cost P187.8 million.

Fr. Edwin Gariguez, executive secretary of National Secretariat for Social Action (Nassa) Caritas Philippines, said the help brought by Development and Peace, other religious organizations and government line agencies showed that the Church “is not giving up on her people.”

“We do everything for the interest of the people. The same with the government, we must give quality service to the people,” Gariguez told SunStar Philippines.

With the various anomalies in government-led housing projects for the typhoon victims, Gariguez said that the Pope Francis Village “should be replicated.”

Nassa said the Development and Peace constructed a total of 1,550 of the 33, 253 housing units from all Caritas response.

A government report said that of the 56,140 government housing units intended for Yolanda victims in Eastern Visayas, only 29,000 have been completed and over half of it were occupied, while another 11,000 units are ready for occupancy. (SunStar Philippines)