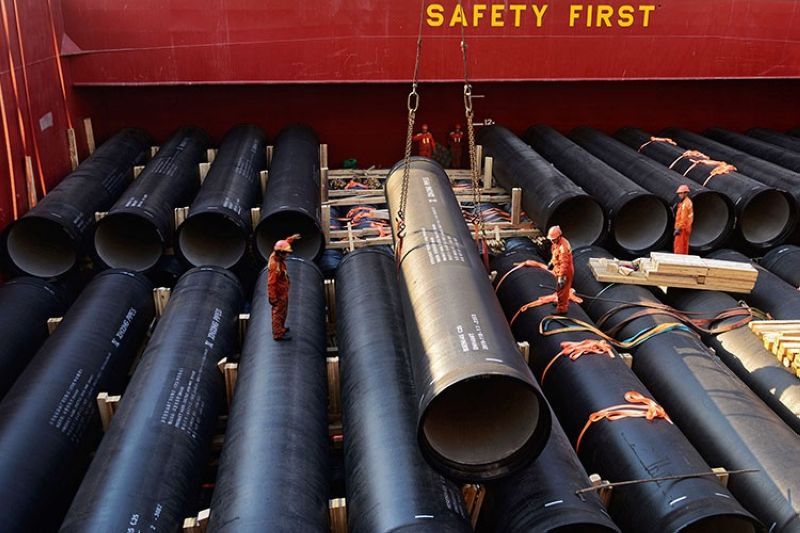 CHINA. In this April 1, 2019, photo, workers load cylinders on a container vessel at a port in Qingdao in east China's Shandong province. (AP)

BANGKOK -- Trade tensions between China and the United States are putting a drag on economies in the region, with growth likely to continue to slow in the coming two years, the Asian Development Bank said in a report released Wednesday, April 3.

The Manila, Philippines-based regional lender's latest economic outlook forecasts that growth in developing Asia will slow slightly to 5.7 percent this year and 5.6 percent in 2020. In 2017, growth was at 6.2 percent.

"The main risk to the outlook is still the ongoing trade conflict, as heightened trade policy uncertainty can negatively affect investment and manufacturing activity," it said. "A sharper slowdown in the advanced economies or the PRC (People's Republic of China) is another risk."

The update comes as China and the US prepare for another round of talks, this week in Washington, aimed at resolving their dispute over China's industrial policies and acquisition of technology.

After the dispute escalated in mid-2018, with both sides imposing billions of dollars' worth of tariffs on each other's products, world trade weakened, contracting nearly two percent in January from a year earlier, the report shows.

It said the solid growth momentum in the first nine months of the year began to fade in the last quarter. Growth in industrial production also showed signs of weakness, the ADB report said.

This is an added burden as the business cycle for major economies heads into a "negative trend," said the ADB's chief economist, Yasuyuki Sawada.

"This global business cycle seems to create some impact on Asian economies," he said in an interview. "It's not only trade tensions."

Other reports show similar sluggishness in the region, which remains the main driver for world economic growth.

The latest set of purchasing manager indexes showed slight improvements in exports in March from January-February for Indonesia, Vietnam, Thailand and Taiwan as well as China.

"But other data suggest that growth in China could well weaken again in the near term," Capital Economics said in a report. "As such, we think it is too soon to predict a turn in fortunes for the region's manufacturing sectors."

On the positive side, inflation should remain manageable and domestic demand in many economies in Southeast and South Asia is vibrant, the Asian Development Bank said.

That's less true of East Asia, where consumers have grown more cautious about spending: auto sales in China, for example, have plunged in recent months in one of the biggest reversals of sentiment.

Developing countries in Asia are seeing an uptick in investment from many parts of the world, especially China, it noted. China's foreign direct investment in new projects such as renewable energy, textile factories and property in the region nearly tripled, while investment by the US jumped by nearly three-quarters.

While much of the ADB's report focused on trade and investment, the bank urged governments across the region to devote more resources to cultivating resilience and taking measures to help prevent or mitigate natural disasters.

The report noted that 84 percent of the 206 million people affected by natural disasters each year in 2000-2018 lived in developing Asian economies. More than half of the 60,000 deaths from such catastrophes each year were in this region, which suffers a large share of extreme weather events and earthquakes.

The report says that a large share of the $1.7 trillion in annual investments in infrastructure needed over the coming decade should go to reducing risks from such disasters.

One area of concern is insurance.

"Almost all direct damage is not covered by insurance," Sawada said.

Another area that could yield strong results is in weather forecasting and warnings in the Asia-Pacific, home to four of every five people affected by storms and other disasters.

While earthquakes and tsunamis are virtually impossible to predict, when it comes to extreme weather, "there is room for constructing mechanisms and building up early warning systems," Sawada said. "There is huge potential." (AP)