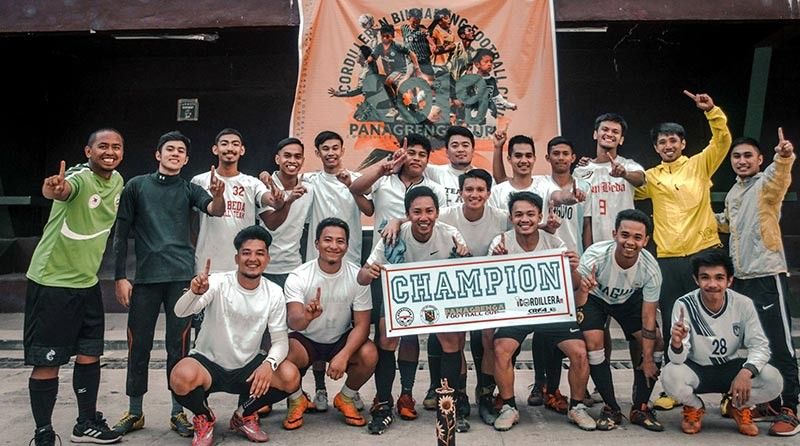 BAGUIO. Members of the CBFC BCNHS Alumni celebrate after topping the 2019 Panagbenga Cup organized by the Cordillera Binnadang Football Club at the Baguio Athletic Bowl during the weekend. (CBFC photo)

FORMER high school footballers made their presence felt in the two day 2019 Panagbenga Cup organized by the Cordillera Binnadang Football Club (CBFC) at the Baguio Athletic Bowl which drew a banner field.

CBFC BCNHS Alumni pipped Baguio Football Alumni Team to win the 11 aside men’s open with CBFC placing third and Nueva Vizcaya Football Club salvaging fourth place in the tournament which also donated proceeds to an athlete who got ill during the recent Caraa held in Apayao and Danilo Pagaduan Jr.

Marvin Viray took home the most valuable player (MVP) honor in the men’s open while the best midfielder went to Jhuie Peralta as Jenno Aquino was named the best striker with Miller Akiapat as best defender and Bruce Malit as best goal keeper.

The MVP honors went to Junuel Fianza while the best midfielder was Jesar Domagus as Ivan Silva was named best striker while Aeron Tenollar took home the best defender honors while the best goal keeper was Carl Beltran.

CBFC also stormed the competition in the 13 under boys 11 a side after stopping Team Palaro in the finals with CBFC B and UES Arsenal Football Club settling for third and fourth respectively.

Lorjane Aludos was named MVP with Danica Kuengan as best playmaker while the best striker was Nicole Calsi with Raven Bungay named best defender while the best goal keeper was Erika Kuengan.

Ian Silva was named the MVP while best striker was Chris Benson.

CBFC Crystal Cave Elementary School was named champion in the 7u 3vs3 with Pinsao Football Team as first runner–up while CBFC Baguio Central School and CBFC bagged second and third runner–up, respectively.