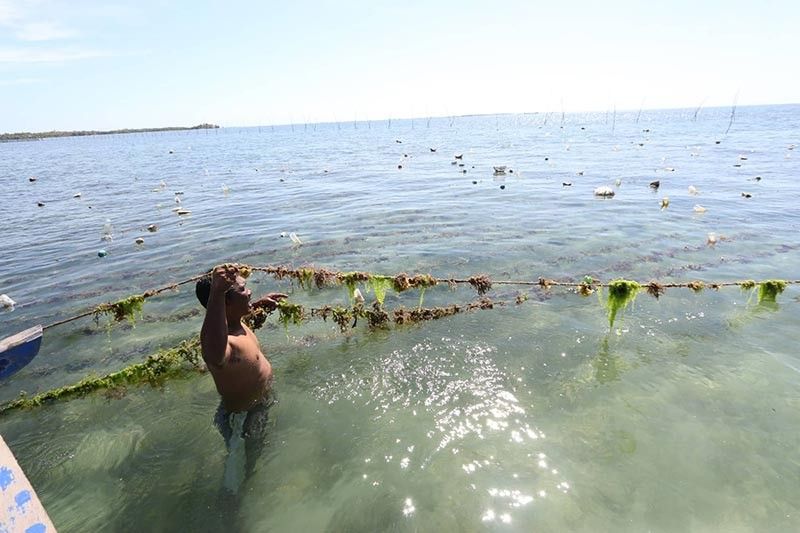 DEADLY HEAT. The ice-ice disease has ravaged 350 hectares of seaweed farms in Bantayan Island. The extreme heat brought about by the weather phenomenon El Niño has raised the temperature in shallow waters where seaweeds are grown. According to Wikipedia, this makes them produce a ‘moist organic substance that attracts bacteria in the water that induces the characteristic withering and hardening of the seaweed tissues. (SunStar photo /Alex Badayos)

WITH 50 marine protected areas (MPAs) affected by the ravages of a coral-preying starfish, the Provincial Environment and Natural Resources Office (Penro) has recommended the declaration of a crown-of-thorns seastar (Cots) outbreak.

Baltazar Tribunalo, head of the Provincial Disaster Risk Reduction and Management Office (PDRRMO), said they expected more corals to be destroyed with the spread of the large starfish that some scientists believed to be timed with El Niño events.

Penro submitted a budget proposal to help local government units (LGUs) and families affected by the weather phenomenon, including P1 million for the cash-for-food program to pay those involved in getting rid of the predators.

Penro also proposed using P18 million to rehabilitate decimated coral reefs in MPAs in the next three years, or until 2022.

According to the PDRRMO, the outbreak was first reported in the towns of Tabogon, Poro, Tudela, Tuburan and Moalboal.

The P18 million is part of the P23.5 million that will come from the quick response fund, which was made available after the Provincial Board placed the whole province under a state of calamity as a result of the effects of the El Niño.

Some P3 million will be used to rehabilitate the water systems in Barangay Arbor in Boljoon and Barangay Sunog in Balamban. The remainder will go to trainings for rainwater catchment and water electrolysis programs.

“I’m worried that the impact of the El Niño has worsened. The biggest challenge we face right now is the lack of potable water and the crown-of-thorns starfish outbreak,” Tribunalo said in Cebuano.

Seven LGUs have also declared a state of calamity, with Carcar City being the first, followed by the towns of Minglanilla, Sogod, Bantayan, Ginatilan, Samboan and Toledo City.

In Bantayan Island, damage to 350 hectares of seaweed farms was estimated to be around P28 million.

During the Water Summit in Cebu City last Thursday, April 4, Tribunalo reported that the water level in the rivers around the province has dropped by half.

In San Remigio, the water level in wells of the San Remigio Water Service and Sanitation Cooperative has fallen close to two meters.