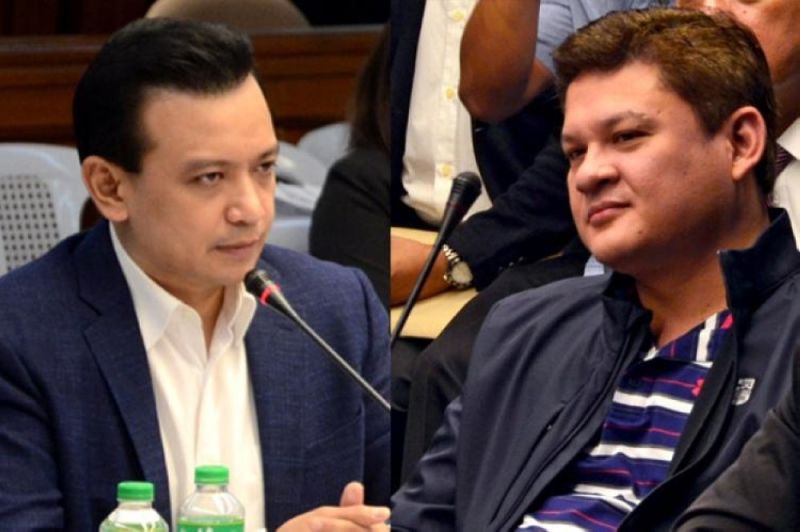 PRESIDENT Rodrigo Duterte defended Thursday, April 4, his son, Paolo, whom he said has no links to the illegal drug trade.

Duterte also accused Senator Antonio Trillanes IV and members of the opposition Liberal Party (LP) of being the brains behind a viral video accusing the presidential son of receiving payoffs from a drug syndicate.

In a chance interview in Palawan, Duterte slammed Trillanes and the "Yellow," a political color of the LP, for making a rehashed claim about his son's supposed involvement in illegal drugs.

"Well, that is a propaganda that has been repeated all the time. Alam mo -- alam ko propaganda na 'yan. (I know it's been a propaganda). I was told. Eh pabalik-balik na 'yan (It's being repeated)... I assure you, were not into it," he said.

A video making rounds on social media has exposed the supposed connection of Duterte's son to a drug syndicate.

A certain "Bikoy," who was featured in the video, showed a list of grease money allegedly deposited into the accounts of drug lord using code name "POLODELTA-TSG01."

Bikoy, who confessed to be a member of the drug syndicate, said the code name was actually Paolo. He also backed Trillanes's previous claim that the presidential son had the alleged code name tattooed on his back.

The younger Duterte, who is running unopposed as Davao First District representative, once again denied his involvement in the illegal narcotics trade and vowed to get back at the accuser.

Duterte's son also accused Trillanes of being behind the video uploaded on social media.

Paolo sarcastically described Trillanes as "admirable" for the opposition lawmaker's "relentless and talent to turn the absurd into something ridiculous, if not bizarrely entertaining."

The Chief Executive, meantime, was displeased by the "black propaganda" of his critics.