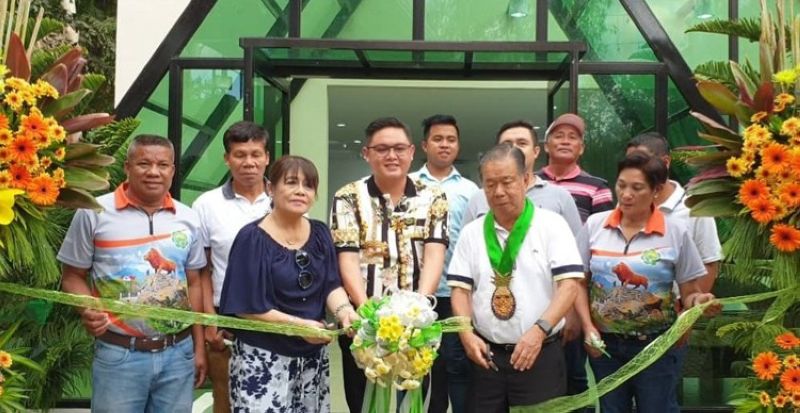 THE local government of Don Salvador Benedicto (DSB) built its own Fiesta Pavilion at Pana-ad Park and Stadium in Barangay Mansilingan, Bacolod City, which was realized through a counterpartying arrangement between the town and the Provincial Government.

Dela Cruz said that the Fiesta Pavilion was completed in time for the opening of the 26th Pana-ad sang Negros Festival, which will be celebrated from April 8 to 14. The pavilion is flanked by a coffee shop and some commercial spaces.

“We would like to thank God first for all the blessings that He has given DSB and its people. This edifice was realized with the help of the Provincial Government, through Governor Marañon, who gave P3 million for this project. P5 million is from the DSB funds,” he said.

He also thanked all the members of the town council, which also gave its support to this project.

Dela Cruz said that the building was designed by M2H Builders’ Dindo Ilagan and constructed by Silver Dragon Construction.

The design includes a façade in the shape of mountains, which symbolize DSB. Pine trees also surround the building as part of the landscape. The available spaces on the ground floor will be used to showcase the products of the town. The second floor will be used as a coffee shop that will also showcase the coffee concoctions of DSB with an overlooking view of the Pana-ad Park pavilions.

The interior of the building houses information and facts about the municipality. The second floor houses the conference room and a roof deck to have a better view of the park, Dela Cruz also shared.

On the other hand, Marañon congratulated Dela Cruz and the other officials for building a beautiful Fiesta Pavilion. He also called DSB a small but beautiful local government unit.

“Your place is very strategic. One of the fastest-growing industries is tourism. We have to be thankful that Negros is the second most visited province in the whole country for domestic tourism. Our growth rate is between 17% to 23% annually. Restaurants and flights are congested because many are coming to the province. Keep your DSB safe, clean and peaceful. Peace is important because without peace, there is no progress and nobody will come there if they feel and see that they are unsafe. So let us keep it clean, safe and environment-friendly,” Marañon said.

“Take care of the environment, like the trees, because that is your asset and it also serves as climate protection,” he added.