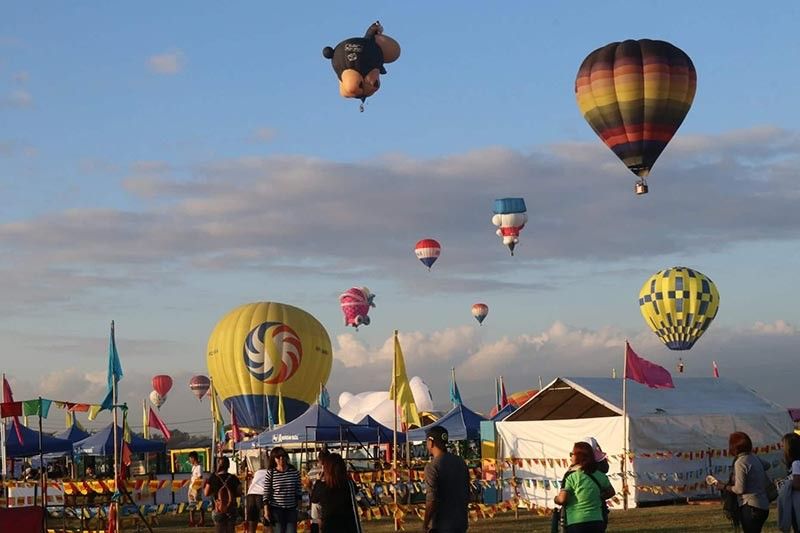 PAMPANGA. Thousands of local and foreign tourist flocked to Pradera Verde in Barangay Prado Siongco, Lubao, Pampanga to get a glimpse of the various shapes, sizes, designs and colors of hot air balloons during Lubao International Balloon and Music Festival kick-off on Friday, April 5. (Chris Navarro)

COLORFUL hot air balloons including special shaped dirigibles on Friday, April 5, soared high and filled the early morning skies of Lubao town as the three-day 6th Lubao International Balloon and Music Festival (LBIMF) lifted off at Pradera Verde in Prado Siongco to the delight of thousands of spectators who came from across Central Luzon.

During the first day of the festival, LBIMF Chairman Noel Castro said that spectators can expect a lot of excitement in the biggest balloon fest so far.

“This year is a banner year for Lubao International Balloon and Music Festival because we will be bringing you above and beyond with a lot of activities in three days that will surely excite the young and the old,” he said.

Castro added that summer wind conditions have been favorable for pilots, who flew special-shaped balloons, including a blue chicken, a pig, a polar bear and “King of Rock and Roll” Elvis Presley.

Among the 31 participating balloons, four are from the local sponsors including the Lubao Municipal Government, Philippine Charity Sweepstakes Office, the SM Supermalls and the Isuzu D-Max.

Aside from the hot air balloons, the LBIMF will also showcase aerial shows, balloon night glow, ultralight, paramotor exhibition, car shows, off-road and rallycross and fireworks display during the festival which will culminate on Sunday, April 7.

The LIBMF has also lined up several mainstream and up and coming local music artists including I Belong To The Zoo, JK Labajo, Ben and Ben, and December Avenue, Al James, Shanti Dope, Gloc 9, and Apl de Ap, This Band, Moira dela Torre and Bamboo.

The LIBMF is held in coordination with the Arts, Culture and Tourism Office of Pampanga and with support from the Provincial Government of Pampanga. (JTD)