A man’s battle, a nation’s dream: Fighting for democracy 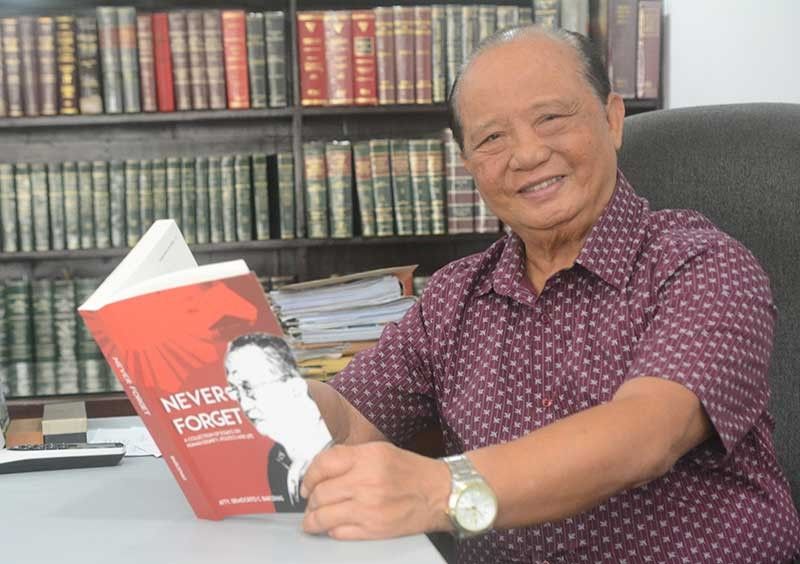 APTLY named, lawyer Democrito Canaya Barcenas has been fighting—in court and through his pen—for preserving democratic ideals and Philippine nationhood all his adult and professional life.

Born in the town of Carcar, Cebu, Barcenas finished grade school and high school in his hometown. For college, he studied at the University of San Carlos. He took up law because he was always “fascinated by law” and the lawyer idols of his youth: Lorenzo Tañada, Jovito Salonga and Jose W. Diokno.

In 1967, he independently ran for councilor in Carcar and won. In 1971, he ran for vice mayor under the Liberal Party and won. In Sept. 21, 1972, president Ferdinand Marcos declared Martial Law. Two days later, Barcenas was arrested by a group led by a certain Col. Zuluete, and then detained in Camp Sergio Osmeña for three months.

Those days were darkest days in his life not only because he was imprisoned but also because his wife, Lourdes, was eight months pregnant. She had to commute every day from where she was teaching at St. Catherine’s School in Carcar, 40 kilometers away from Cebu City, to see him and bring him food.

Of those days he wrote in an opinion essay published in the Independent Post: “I still remember the psychological torture that we, detainees, suffered when we were told that we would be tried before the military tribunal, and that we would be transferred to Corregidor Island... My detention gave me time to reflect, study and read almost everything, as I borrowed books from Resil B. Mojares (who was then, also a detainee).”

Without charges, Barcenas was released on Dec. 23, 1972. His wife was able to secure a release from Gen. Luis A. Amor.

Barcenas explained that he was arrested because he was a student-activist lawyer, and that was then the height of student activism with activists like Meinrado Paredes (who was also arrested, before eventually becoming a Regional Trial Court judge) and Antonio Concepcion. In 1967, Barcenas became a charter member of the Movement for the Advancement of Nationalism founded by Tañada, together with some other professors like Francisco Nemenzo and Merllin Magallanes, and Jose Ma. Sison who, in March 1970, founded the Communist Party of the Philippines/New People’s Army and went underground.

In 1974, Barcenas joined the Free Legal Assistance Group (Flag) founded by Sen. Diokno during the darkest years of Martial Law. He explained: “The main purpose was to defend thousands of detainees languishing in several detention centers in the country. We did not just limit ourselves to the victims of political prisoners, we also defended victims of human rights violations like the urban poor, the farmers, the students and other marginalized sectors of society.” Presently, he is the chairman of Flag Region 7.

After his arrest, Barcenas went on to serve as vice mayor of Carcar. He ran for mayor in 1980 and lost. In the aftermath of his incarceration, his anti-Marcos feeling intensified, especially after the death of senator Benigno Aquino in 1983. He was active in the anti-Marcos struggle until Marcos’ fall in 1986 through the People Power Revolution. Former president Corazon Aquino then appointed Barcenas as vice governor of Cebu, a post he held for about three years.

In 1983, he started to write opinion essays which saw print in newspapers like the Republic News, Independent Post, Philippine Daily Inquirer and Cebu Daily News. About 70 percent of his essays came out in SunStar Cebu.

“I wanted to express my right as a citizen; to express my views on current affairs. I really love writing because it is where you can express your views not only in politics but also in the field of religion, human rights and, most of all, on nationalism.” These essays, he has compiled in a book aptly titled “Never Forget.”

Surely, the family will never forget what their father stood for, and will hopefully continue his quest for human dignity, democracy and nationalism.