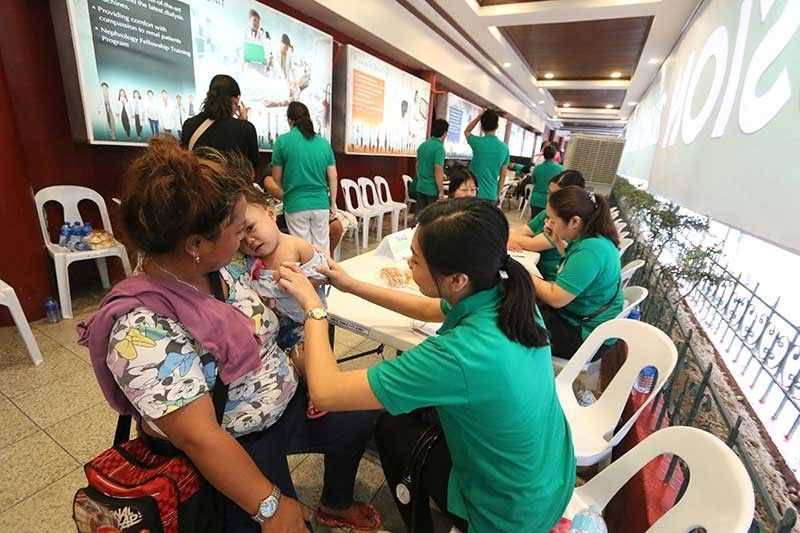 FOR THE POOR. Volunteers at the surgical mission in Chong Hua Hospital in Cebu City attend to the first few patients who registered to avail themselves of the free operation. (SunStar Photo/Alex Badayos)

AT LEAST 200 poor patients will benefit from the surgical charity mission of the Asociacion Benevola de Cebu Inc., a project that was launched on Saturday, April 6, to help patients recover from illnesses and become productive citizens again.

The association, which runs Chong Hua Hospital in Cebu City and Mandaue City, earmarked P35 million for the free surgery.

Dr. Helen Po, chief operating officer of the two Chong Hua Hospitals, said their first objective is to heal people through surgical procedures so they can be functional again, especially if they are the breadwinner in their respective families.

She said the association wants patients to be productive again in their communities and to contribute to nation-building.

Po lamented that not everyone gets the chance to survive an illness due to the high cost of surgical procedures, averaging at P100,000 per operation.

To avail themselves of the free surgery, pre-registered and walk-in patients are screened and evaluated to determine if they have a healthy heart and lungs to survive an operation.

If a patient qualifies, he or she will be scheduled for the operation.

Dr. Joanne Cosin, first vice president for clinical operation at the Chong Hua Hospital in Cebu City, said that in this surgical mission, the patients will not have to shell out any amount of money, not even one peso. Those who have no money for incidental expenses will be provided with transportation and meal allowance.

Cosin said they initially targeted 200 patients but the number increased because of walk-in patients who wanted to avail themselves of the free surgical procedure.

Among those who led the mission are Benevola chief executive officer and president Victoriano Go and Benevola chairman of the board Benito Gaisano.

Go said the surgical charity mission is their project for the poor.

“The hospital itself is already for charity. It’s a non-stock, non-profit institution, so there’s no profit. Whatever profit it earns, it spares a certain budget for community work, which is heavily medical because it is a hospital,” Go said.

Go said they are not limiting their charity work to medical and surgical missions. They also have other projects that benefit the local police.

The surgical mission started nine years ago when the late Lim Liu headed Benevola. He proposed to the board to allocate funds for surgical charity, which the board approved. (EOB)