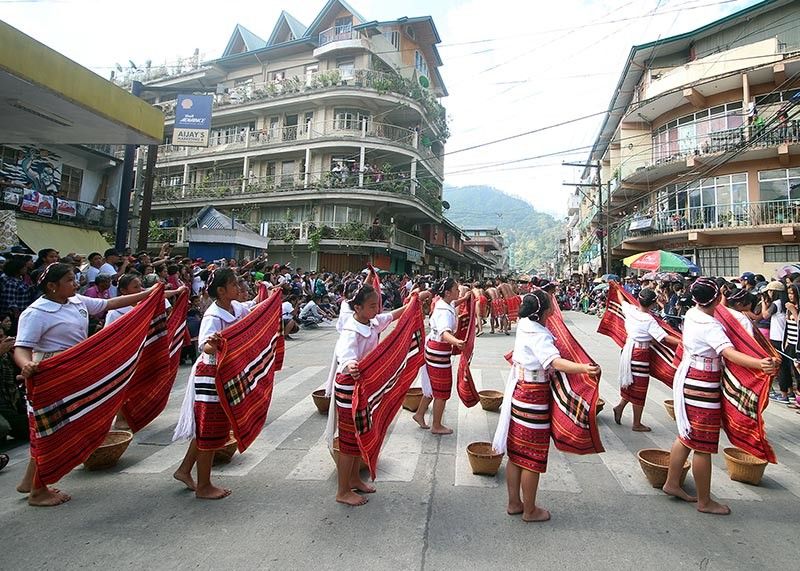 MOUNTAIN PROVINCE. Performers from different municipalities of Mountain Province show a glimpse of their rich culture and traditions through their chants and street dance performance. Mountain Province celebrated its 52nd founding anniversary and the 15th Lang-ay festival during the weekend. (Photo by Jean Nicole Cortes)

IT’S BUSINESS as usual in the Mountain Province.

Governor Bonifacio Lacwasan Jr., over the weekend assured his constituents and even tourists visiting the province peace and order remains despite the isolated cases of encounter between government troops and the New People’s Army in Bauko town where two police officers were killed while several others were wounded.

Lacwasan during the 52nd founding anniversary and the Lang-ay Festival added the province still enjoyed huge crowd, especially tourists coming from the different parts of the country in the weekend twin events.

SunStar Baguio learned several families evacuated away from the firefight last week particularly in Mount Kapuwaw in sitio Mabalagan, Bagnen Proper while the municipality is looking at certain intervention programs such as counseling and debriefing for those affected residents.

“We will help in whatever way we can. Will just have to wait what program the town will implement and where the province can help,” added Lacwasan.

While police and military personnel were augmented during the festivity, Lacwasan added the province remains one of the most peaceful in the country.

With the theme, “Nurturing Cultural Traditions Through Indigenous Peoples Education,” the province celebrated the weeklong event attended by officials and personnel of the different LGUs, national line agencies, academe and people’s and non-government organizations.

Various activities were lined up by the provincial government with partner agencies like DTI, Tesda, among others.

Maricar Togana of Bauko was crowned as Miss Mountain Province 2019 during the Search for Miss MP beauty pageant and coronation night at the Provincial Plaza while Erika Mae Lacwasan of Sabangan was 1st runner up while Quenne Bantiloc of Tadian was second runner-up.

Lang-ay is a native term of the Bontocs which depicts the culture related to share happiness, wisdom, promoting family solidarity, hospitality, peace and nurturing friendship by partaking of the native rice wine or “tapuey”.

Meanwhile, the municipality of Tadian will be conducting a peace rally Tuesday, April 9.

Nineteen barangays of the municipality are set to participate in the unity walk to express condemnation of the conflict said Mayor Anthony Wooden where a prayer service will also be conducted.

Wooden said the activity is a move from the “umili” (people). (With a report from Lauren Alimondo)