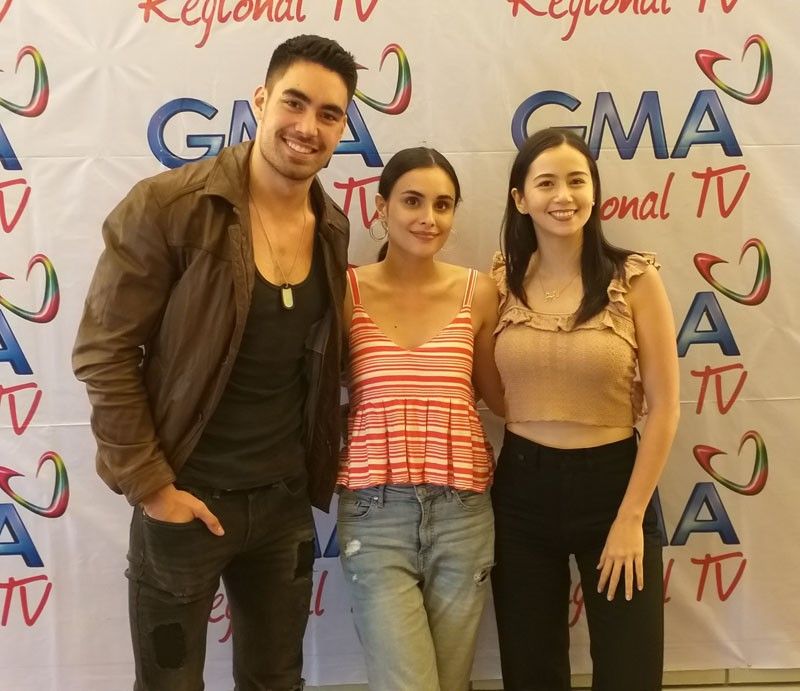 BACOLOD. (From left) Kapuso stars Clint Bondad, Max Collins and Sophie Albert during the press conference at Planta Hotel prior to their Kapuso Fiesta show at Panaad Park and Stadium in Bacolod City on Monday, April 8. (Erwin P. Nicavera)

They were joined by Clint Bondad, who is part of the upcoming GMA's romantic-comedy show “Love You Two” top billed by Jennylyn Mercado and Gabby Concepcion.

Collins, in a press conference at Planta Hotel in Bacolod City prior to the event, said the series underscores the importance of family.

Collins is playing the role of Jessie, a simple and loyal wife to Jason Abalos whose character is Brylle, a pediatric surgeon.

She said if family members stick together and support each other, they will overcome whatever problems that may arise.

“A strong family foundation is very important,” Collins said, adding that one tip for parents is never to leave their children unattended.

“Bihag” is the newest afternoon prime series which debuted on April 1.

The soap mirrors an image of a happy family. But when an unfortunate hostage-taking involving their son happens, betrayal arises and soon they find themselves and their perfect family falling apart.

Kapuso viewers are in for a thought-provoking tale how one mistake can lead to another, the network in a statement said.

Albert, playing as Reign, the woman who will come between Brylle and Jessie, said “Bihag” would tell audience that deceit and lies won't take one anywhere.

“It’s really hard to keep up with lies, its root will just continue like a spiral until it becomes worst,” she added.

The story of “Love You Two,” meanwhile, revolves around a super-rich heir to a real estate company who is dating a woman half his age. But, things got even more complicated when he falls in love with his girlfriend's older sister.

Bondad said this is his first “regular” project with GMA Network, and he’s very happy working with other Kapuso artists.

Also, this is his first time in Negros Occidental and that he wants to taste a lot of Negrense cuisines.

“I am also excited to feel the energy of our Kapuso here in Negros,” Bondad added.

For his part, Oliver Amoroso, vice president and head for GMA Regional TV, said the network is excited in taking part of this year's Panaad sa Negros Festival.

“We have prepared a series of activities all for our Kapusong Negrenses who continue to support us in GMA Regional TV,” he added.