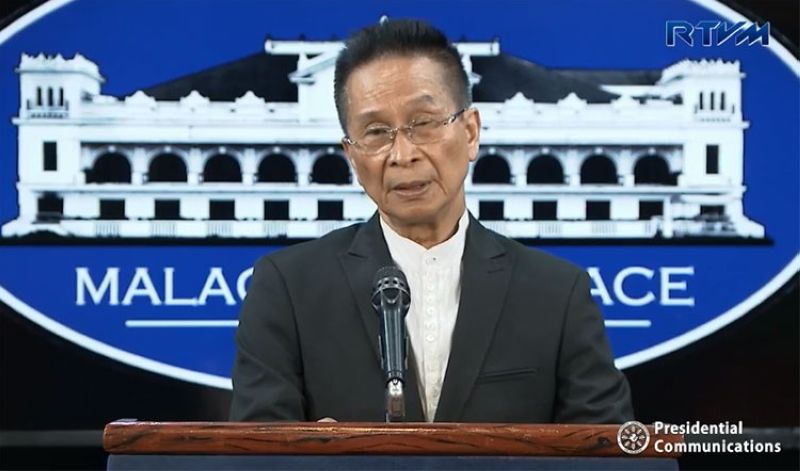 THERE is no reason for President Rodrigo Duterte to explain the origin of his wealth, as the Chief Executive has "properly declared" it, said Malacañang on Monday, April 8.

“What is prohibited is when you do not declare your assets. But he has declared them, so what’s the hullabaloo?” said Presidential Spokesperson Salvador Panelo in a press briefing in Malacañang Monday.

Panelo's statement came as the Philippine Center for Investigative Journalism (PCIJ) called on Duterte to answer queries about his wealth, as it did not seem to add up to his “modest” salary as head of state.

Panelo said not identifying the source of a person's wealth is not a violation of the Constitution.

“Ang violation iyong hindi mo dineclare (The violation is that you failed to declare it),” he said.

He also shut down the claim of PCIJ executive director Malou Mangahas that the Office of the President failed to respond to their request letters over the last five months.

Executive Secretary Salvador Medialdea, for his part, noted how critics and detractors have always been nitpicking on Duterte's Statements of Assets, Liabilities, and Net Worth (SALN).

“They have tried to make an issue out of even the minutest detail in hopes to pin the President for some wrongdoing but to their dismay their efforts had all failed,” said Medialdea in a separate statement.

While the President’s SALN is open to the public, the two Palace officials emphasized that the Office of the President does not possess Duterte’s assets long before he assumed the presidency.

“The SALNs covered by their request have been submitted years before PRRD became President and are not in the possession of OP,” Medialdea said

Panelo also explained why the President’s law firm was not declared in his SALN, raising the possibility that the law firm could be currently non-existent.

“If that law firm was established during the time when he (Duterte) was a practicing lawyer, eh matagal na matagal na iyon. Baka non-existent na iyon (that was a long time ago. It might be non-existent by now),” Panelo said.

Medialdea, meanwhile, assured that Duterte remains committed to his cause to eradicate corruption and rid of the government of corrupt officials.

“We have seen heads roll from lowly rank and file employees to heads of departments and agencies. He can look these people he fired in the eye kasi wala siyang bahid ng (he doesn’t have a tinge of) corruption,” Medialdea said.

In a speech in Iloilo City last April 6, Duterte slammed the PCIJ report scrutinizing his family’s wealth and accused journalists of being paid hacks.

Duterte said what his family earned outside their jobs as politicians was none of their business.

The PCIJ, which has also reported on wealth of previous presidents, maintained that Duterte and his family members should have granted their request for comments or interviews to get their side before the story ran. (PNA)