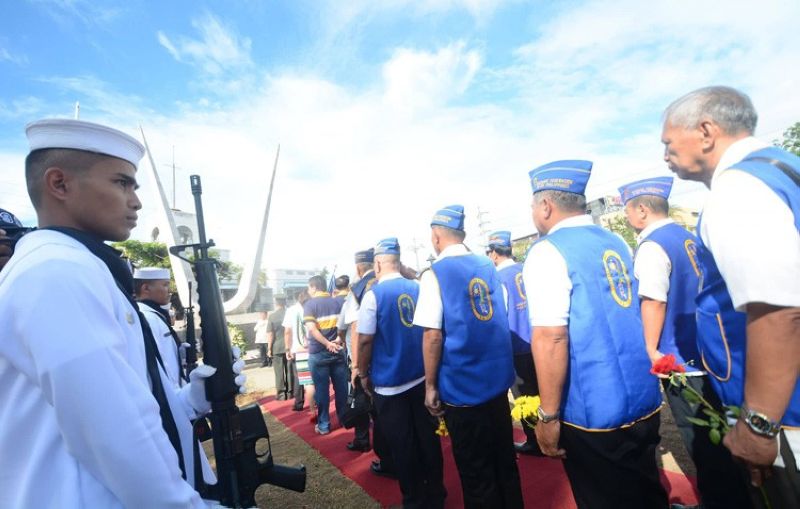 CEBU. Surviving veterans gather at the Plaza Independencia for the 77th commemoration of Araw ng Kagitingan or the Day of Valor, which commemorates the sacrifice of soldiers during World War II. (SunStar/Amper Campaña)

THE Cebu City Government recognized the efforts and sacrifices of the Filipino veterans who fought for the country during World War II.

During the 77th commemoration of the Araw ng Kagitingan (Day of Valor) on Tuesday, April 9, Mayor Tomas Osmeña said he would continue to honor the brave individuals who would dedicate their lives to protect the general public.

He cited the courage of four government troopers who died in an encounter with the Abu Sayyaf Group in Inabanga, Bohol in 2017. The families of the fallen soldiers received P500,000 each from the City Hall.

“We acknowledge it (sacrifices of the government troops) because if we don’t have people like that, they (terrorists) might be in our doorsteps today,” Osmeña said.

Osmeña further said the country should celebrate victories, instead of remembering defeats. He pointed out the importance of celebrating the Battle of Mactan.

“I hope that we should go beyond celebrating our defeats and look and see that once we won. We beat (one of) the first foreign invaders in Asia whose name was Ferdinand Magellan. How come we don’t celebrate the Kadaugan sa Mactan? It should be a very important part of our history because it is inspiring,” he said.

The Araw ng Kagitingan is observed to pay tribute to the brave souls who fought during the Fall of Bataan on April 9, 1942.

Labella said he does not want the heroism of the freedom fighters to go in vain.

He said the country has to continue fighting battles against corruption, illegal drugs, killings, criminality, poverty, and political and social imbalance.

The Central Command of the Armed Forces of the Philippines also held a display, dubbed as “Kampo Kagitingan (Camp of Valor),” in Plaza Independencia where the public could see the weapons and equipment used by the army, navy and air force.

Meanwhile, some members of the Philippine Veterans Affairs Office (Pvao) in Cebu are seeking to lower the age of the group’s membership from 65 to 60.

“We suggested and requested to lower the age... because there is a survey saying that life expectancy of a senior citizen averages 68 years only. So, how can we use our pension?” said Ret. Lt. Mario Marasigan of the Veterans Federation of the Philippines (VFP).

On April 5-11, Pvao celebrates Veterans’ Week, which gives free services to the retired personnel of the uniformed service.

Some of the veterans from the military and the police availed themselves of medical check-ups. (From RVC, SCG of SuperBalita Cebu, KAL)