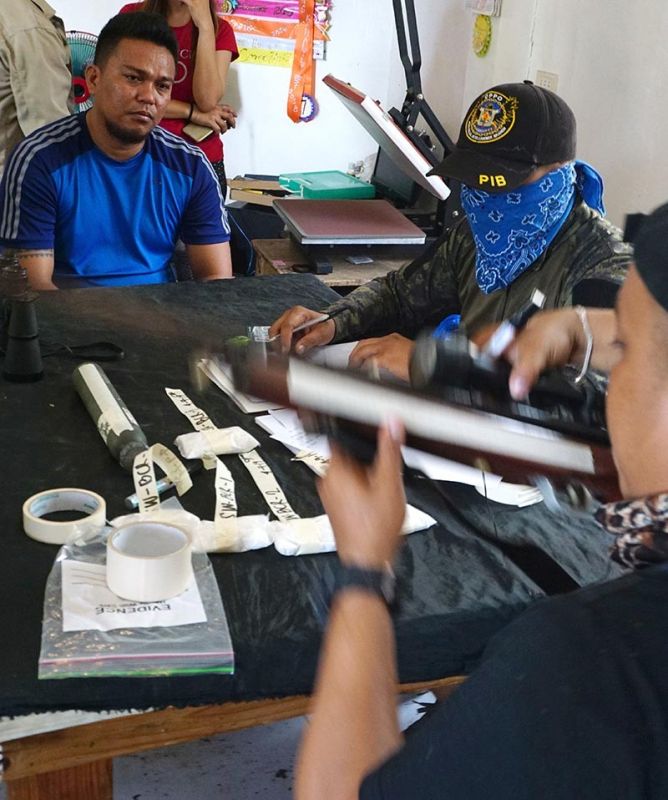 Because at 6:55 a.m., police and anti-narcotic enforcers were in his house in Sitio Caduldulan and were showing him the 500 grams of shabu worth P3.4 million and an air gun without a permit they allegedly had found in it.

They told him they had on good information that his house was a warehouse for shabu and drug pushers got their stash from him.

Their information was wrong, Ramos’s wife Rowena said. There are people envious of her husband and that the couple earn their livelihood from printing basketball uniforms and other stuff. Also, the couple did not know that keeping an air gun was illegal.

Ramos, the councilor, preferred to keep mum and be heard in court instead.

Less than 12 hours before the raid on Ramos’s house in Talisay City, a buy-bust was conducted on C. Padilla St., Barangay Duljo Fatima, Cebu City.

The boy, whose name is withheld for being a minor, said he was only running the errand for someone else. He would only deliver the stash to someone in exchange for money.

The DEG coordinated with the Mambaling police to entrap the boy, Mayam said.

When police asked him who his source was, the boy mentioned Raven Donza.

Donza, 20, was arrested on March 8, 2019 in a buy-bust also on C. Padilla St., Barangay Duljo Fatima. Seized from Donza were five kilos of shabu worth P30 million.

The 16-year-old boy was turned over to the Operation Second Chance, a halfway center for minors in conflict with the law.

In the case of barangay councilor Ramos, Cebu Provincial Police Office (CPPO) chief Police Captain Alejandro Batobalonos said the police received a tipoff that Ramos was involved in illegal drugs and that his house was used as a safehouse by a top drug dealer in Talisay City.

Batobalonos said Ramos’s house is built with a vantage point that allows him or anyone in the house to see who is approaching. A narrow road leads to Ramos’s residential compound.

To avoid suspicions from Ramos, police operatives rode motorcycles to enter the compound.

Batobalonos said Ramos is in cahoots with Girly Luage, a bigtime drug player in Talisay City based on the police list.

Luage, who is also from Lawaan 3, has a pending warrant of arrest, the police official said.

Payments would be done in Ramos’s house.

Batobalonos said they know the information about Ramos from his neighbors and barangay officials of Lawaan 3.

The raid on Ramos’s house and his arrest were conducted by members of the Provincial Intelligence Branch and Provincial Drug Enforcement Unit (PDEU) of CPPO.