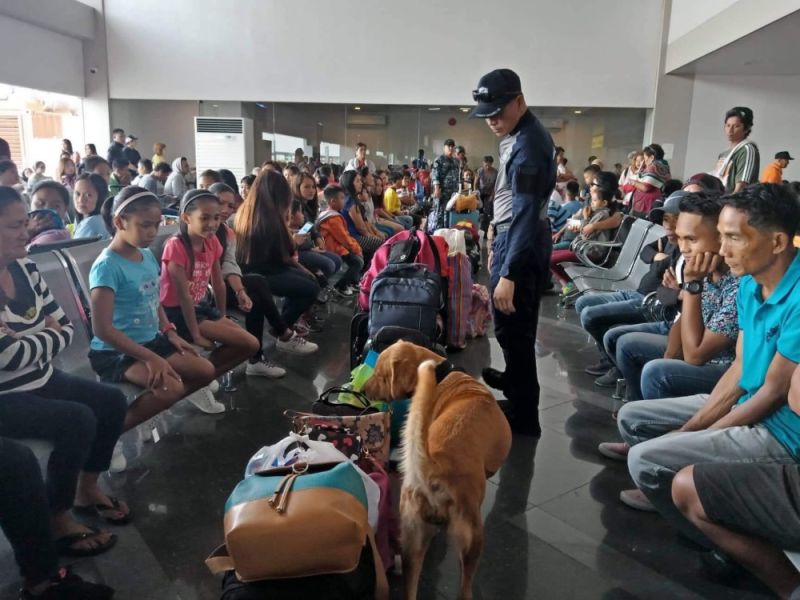 BACOLOD. A personnel of the Philippine Coast Guard along with a K9 inspect baggage of passengers at the Bacolod Real Estate Development Corp. port in Bacolod City Tuesday, April 9. (Contributed photo)

THE Philippine Coast Guard (PCG) in Negros Occidental is on heightened alert since April 5 in preparation for the Holy Week on April 14 to 20.

Commander Ludovico Librilla Jr., head of PCG-Negros Occidental, said they have launched Oplan Biyaheng Ayos Semanta Santa 2019 on April 8 to intensify their security measures for the Lenten season next week.

Librilla said Malasakit help desks under the Department of Transportation were placed in all ports and substations in the province to assist passengers.

A minimum of six personnel were deployed at Bacolod Real Estate Development Corp. and Banago ports as well as in substations in the cities of Escalante, San Carlos, and Sagay, and municipalities of Valladolid and Pulupandan, he added.

He said K9 dogs were also deployed at the ports to do paneling and random inspection of baggage.

He will also deploy personnel to check boats from Pulupandan and Valladolid towns to Guimaras and vice-versa to prevent entry of contrabands, he added.

The influx of people are expected starting Wednesday next week in time for the Lenten season and vacation of some individuals.

Librilla also said they will strengthen their presence in beach resorts, and shorelines as they expect influx of people in these areas for a short vacation.

“We will also conduct patrolling in shorelines,” he added.

They are currently conducting lifeguard training in the province in compliance with the office’s memorandum.

“It will provide proper training and skills enhancement for lifeguards in order for them to be capable and proficient in saving life in any aquatic environment particularly tourist visiting area,” he said. (GYM)