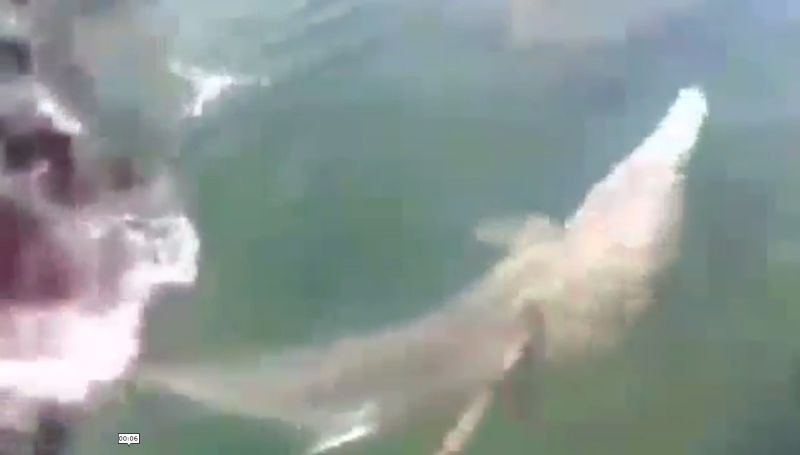 NORTHERN SAMAR. A screenshot from the video submitted by a concerned citizen showing a spinner dolphin trying to make a escape after it was mercilessly speared by residents in Victoria, Northern Samar. (Ronald Reyes)

A STRANDED spinner dolphin was mercilessly speared with a bamboo pole by river-goers in Victoria, Northern Samar, said the Bureau of Fisheries and Aquatic Resources (BFAR) in Eastern Visayas.

A video submitted to BFAR by a concerned citizen shows how the spinner dolphin, locally known as “lumba-lumba,” tried to swim away, but it was speared instead.

Personnel from the Municipal Agriculturist and Agricultural Technician-Fisheries initially responded to the site but were not able to see the spinner dolphin at the Bangon River. Witnesses said the dolphin could have swum away.

A resident, however, found it, chopped and brought its meat to his house in Sitio Karawisan, said BFAR.

Authorities, though, did not find the dolphin’s carcass at the suspect's residence.

“Killing of rare, threatened and endangered fishery species such as spinner is a violation of Fisheries Administrative Order 208,” BFAR said.

It added that violation of the order “shall hold the offender liable to the penalty of imprisonment from 12 years to 20 years or a fine of P120,000, or both such fine and imprisonment in the discretion of the court, including forfeiture of the catch subject of the offense and cancellation of his fishing permit, if applicable.”

Commonly found off-shore tropical water, a spinner dolphin is a small dolphin known for its acrobatic displays, like spinning and leaping through the air.

The BFAR urged the public to immediately report similar illegal activities to authorities for swift action and implementation of the country’s fishery laws. (SunStar Philippines)