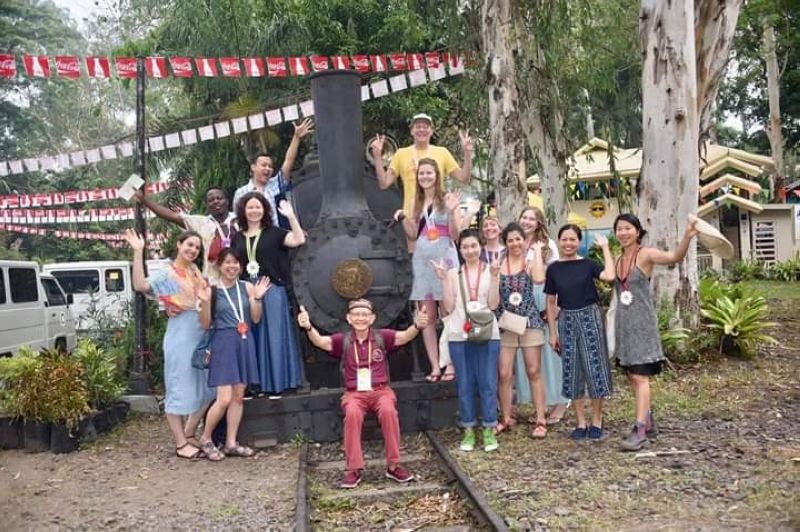 BACOLOD. Provincial Supervising Tourism Operations Officer Christine Mansinares (second from right) with the masteral students of the University of Gastronomic Sciences in Italy during their tour at Panaad Park and Stadium in Bacolod City on Tuesday, April 9, 2019. The activity is part of their five-day immersion in Negros Occidental. (Contributed Photo)

TWENTY-TWO students taking their master's degree at the University of Gastronomic Sciences in Italy are currently having their immersion in Negros Occidental to learn the food culture of the province.

Mansinares said the group wanted to learn about the cultural identity in food, gastronomy, aquaculture, and agriculture of the province.

"They consider destinations that are free from genetically modified organism (GMO) and those working on renewing farming methods, protecting biodiversity and building an organic relationship between gastronomy and agricultural science," she added.

Other partners are El Sola Travel and Tours and Alliance of Tour Guides in Occidental Negros.

Mansinares said local food culture involves the "way" how Negrenses prepare the food as well as food items that are unique and ingredients endemic in the province.

The tourism official said the visit is timely as the province is celebrating the 26th Panaad sa Negros Festival.

The annual event celebrates the rich culinary offerings and the strengthened organic farming program of the 32 towns and cities in the province.

"We have been regularly hosting them for four years already. One gain for the province is the continuing tourism business exchange with the university," Mansinares said, adding that the students pay for all the sites they visit including accommodation and tour services.

In terms of promotion, the tour program has provided the province with direct link enabling slow food representatives from Negros to participate in the Terra Madre food conference in Italy, she also said.

They then met Governor Alfredo Marañon Jr. along with Ramon Uy Jr. of Slow Food Negros Island Community on the same day.

They are also set to visit Sagay City to learn sea ranching, a technology for harvesting marine products, and experience how to harvest "tuba" or coconut wine.

Other destinations for the tour, which runs from April 9 to 13, include Mambukal Mountain Resort in Murcia and a cacao farm in Bago City, among others.

For his part, Uy said since the students are doing research on food globally, the province is getting boost as its culinary offerings can be promoted all over the world.