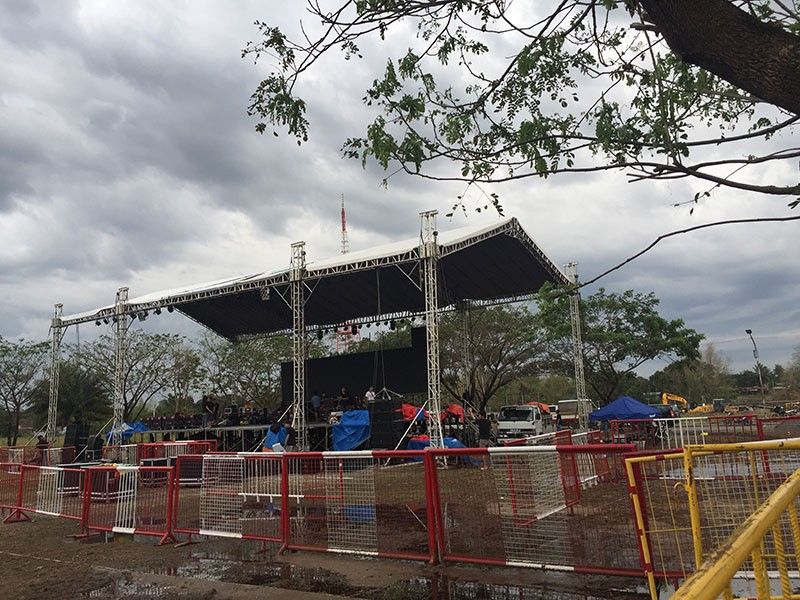 Bacolod City Government prepares for the arrival of President Rodrigo Duterte for the campaign sorties of Partido Demokratiko Pilipino ng Bayan (PDP-Laban) at the back of Bacolod Government Center today. (Photo by Merlinda Pedrosa)

Mayor Evelio Leonardia said Wednesday, April 10, he is not a spokesperson of President Duterte’s visit here, but he confirmed that his political group Grupo Progreso was tasked to prepare for the activity.

He said the activity will be held behind the Bacolod Government in the afternoon instead in Pope John Paul II Tower at the Reclamation Area which was the first option.

“We’re very happy, feel honored and very flattered because usually if Davao City Mayor Sara Duterte-Carpio already visited a one place, President Duterte will not come in the area but here in Bacolod City, both of them were here,” he added.

Leonardia noted that government transactions will continue as usual at the Bacolod Government Center.

“There will be no disruption of government office because President Duterte do not want to disrupt the operation just because of his visit here,” the mayor said.

Last month, Grupo Progreso signed an alliance with the regional party Hugpong ng Pagbabago (HNP) for mutual support and cooperation for the May 13 elections.

The alliance agreement was signed by Leonardia, head of Grupo Progreso, and Mayor Sara, chairperson of HNP, during the campaign rally for the HNP senatorial candidates held at the Panaad Park and Stadium in Barangay Mansilingan, Bacolod on March 25.

Leonardia said that during the HNP campaign rally in Barangay Mansilingan, about 12,000 people attended the event, and for Thursday’s event, they are preparing to accommodate about 15,000 persons.

“This is the first rally ever at the Bacolod Government Center and we are inviting everybody to witness the event,” he said.

He added they also requested the presidential management staff not to close the Circumferential Road for the convenience of the commuters.

Almost 500 policemen will be deployed to provide security for the campaign sorties of PDP-Laban.

Of the total number, four platoons composed of 245 policemen from BCPO and Nocppo were assigned as members of the Civil Disturbance Management (CDM) in case of protest actions from the militant groups.

The City Police force also tapped 12 personnel from the Explosive Ordnance Disposal (EOD) team of the 303rd Infantry Brigade (IBde) of the Philippine Army and K9 team of the Maritime Security to conduct paneling and inspection of vehicles and valuables.

The remaining policemen will be stationed as perimeter security at the entry and exit points as well as in parking areas at the venue.

The security outside Bacolod City will be provided by Nocppo, he added.

Pico said vehicles were prohibited at Bacolod City Government Center starting Wednesday night to clear the area for the activity the following day.