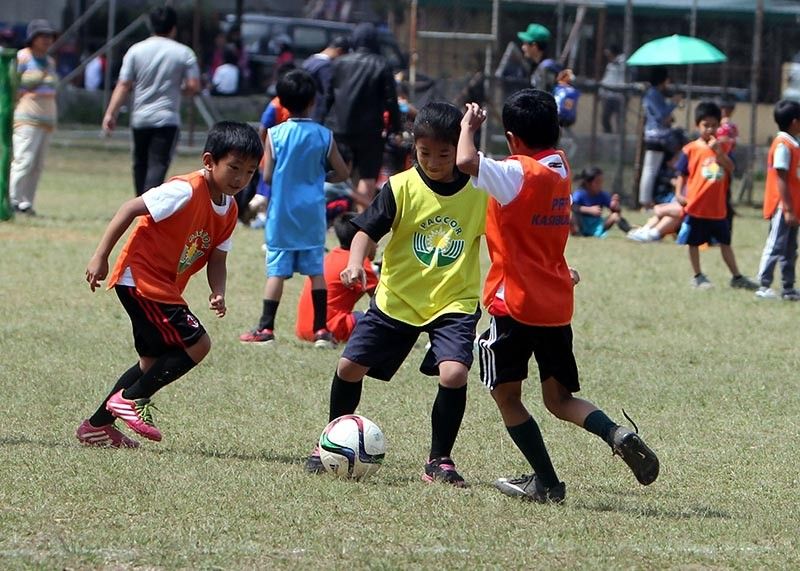 BAGUIO. With the growing popularity of football and futsal in the country, more and more children join skills training and competition all over Benguet as Cordillera Football Association continue to conduct clinics and monthly tournaments. (Photo by Roderick Osis)

HOPING to follow the footstep of Aeron Tenollar, several futsal and football squads in Baguio and Benguet will vie for honors in the regional qualifiers of the Allianz National Youth Futsal Invitational (ANYFI).

Tenollar, a former student of Baguio City National High School, earned a trip to FC Bayern Munich in Germany for the Allianz Junior Football Camp in 2017.

The town of Lingayen in Pangasinan and Angeles City in Pampanga will be the host for this year's Luzon Regional qualifiers of the Allianz Explorer Camp Football Edition hatched by Allianz Philippines.

A partnership with the Henry V. Moran Foundation and in coordination with the Philippine Football Federation (PFF), this annual event aims to encourage aspiring football and futsal players in the country to not just excel in these sports in their hometowns, but aim to play in international competitions as well.

"The sport of football has progressed a lot since we started our futsal invitational three years ago. We have sent our most talented Filipino players in one of the best if not the best football camps in Asia and Europe. Many of them have advanced in their careers getting into the national team and representing the country in games abroad. We have also brought them to train at the FC Bayern training grounds of Sabener Strasse in Munich, Germany, and they have shown that they can indeed play amongst the best young football and futsal players in the world," said Rei Abrazaldo, brand communications and digital director, Allianz Philippines.

“The Philippines is teeming with talents in football. We just need to give our youth the support and venue to further hone their skills and excel in the sport. In the Philippines, this can be easily achieved through futsal, a sport that can be organized and played in gyms. It’s proven across the world that futsal develops better football players, and our experience tells us that futsal is an appropriate development approach for the Philippine setting,” said Danny Moran, chairman of the Henry V. Moran Foundation, the non-profit organization dedicated to helping the youth in public schools across the country through football and futsal.

“The PFF is always pleased to see private entities like Allianz and the Henry V. Moran Foundation in helping us grow the sport of futsal in the country. Allianz’s support is a welcome act by the PFF and we hope that the children who join this tournament will have fun and display their skills and talents throughout the competition,” he said in a message.

PFF Futsal Department Head Kevin Goco added: "Our young players’ achievements will not only make their parents, teams, and communities proud; they can likewise make their country proud. We have seen it before and we hope we continue seeing it in the future as the popularity of the sport progresses in the coming years. Futsal is the world’s fastest growing indoor sport, and we feel it has massive potential in engaging more communities, creating world class athletes, and improving lives.”