Game of Thrones: A campaign on climate change 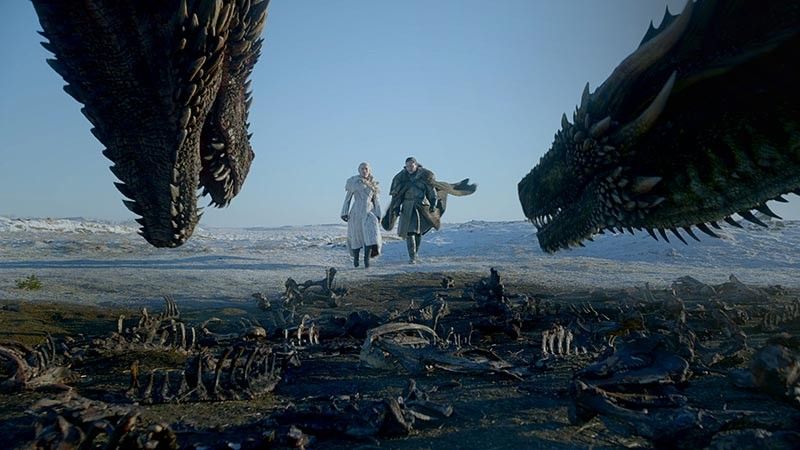 A sneak preview of Game of Throne’s Season 8. (Photo from HBO)

MONDAY is expected to be the beginning of an epic ending, as HBO’s “Game of Thrones,” will air the final episodes every week, for its final season.

This TV series, inspired from the novels written by George R.R. Martin, swept the world, and that includes Philippines, despite imageries of sex, nudity, and mercilessly killing almost everyone including main characters where audiences were already attached. And yet, the show must go on.

In the previous seasons, show runners are teasing the audience about “winter is coming,” and now it has finally came in the fictional world of Westeros, things have yet to unfold - at least in the last episodes to come.

As phenomenal as the show has become, attaching it to social realities can take an interesting turn of discussion, such as: if it snows in the Philippines, would it be a problem or a miracle?

This phenomenon may only be a figment of imagination. How can a tropical country like the Philippines experience winter when its humid climate produces days where temperature can reach 37 degrees Celsius (and with the El Niño around, can reach up to 42C)?

Comparing the climates of Westeros and the Philippines is like drawing similarities between Jon Snow (one of the main characters in HBO’s popular fantasy series which will be discussed later) and Jose Rizal (one of the popular martyrs in the canon of Philippine heroes). The former is fictional, while the latter is factual (albeit in history). Either way, both had experienced and accomplished deeds from which lessons can be learned and applied when global issues worsen.

Game of Thrones (the aforementioned fantasy series) is ending this year with its six-episode season finale. Based on the best-selling novels originally entitled “A Song of Ice and Fire” by Martin, the narrative tells about warring families (labeled as Houses) in pursuit of political power, nobility, vengeance and freedom in Westeros, the fictional realm ruled by whoever sits on the Iron Throne.

Like many stories in the high fantasy genre, it has been inspired by medieval themes of chivalry, honor, bloodlust and conquest. The author himself even acknowledged that some of its events such as the conflicts between noble families have been based on periods in the middle ages when the fate of kingdoms have relied on the diplomacy of monarchs.

As the series have accumulated critical praise and a cult following since it began airing on HBO in 2011, its theme of warfare is only one among the many issues that the series depicts. Its final season will show both fans and viewers how the characters whose families and clans had waged war among themselves in the previous seasons will unite in allegiance to face the greatest threat that Westeros has yet to face - the long winter brought about by the Night King. This non-human entity with blue eyes and pale cracked skin leads an army of undead, robbed of any conscious morality. All they do is eat on the flesh of the living, especially when winter sets its place.

Seasons in Westeros do not occur in a yearly cycle. What makes this different from the real world is that summer in that land may extend for years; and so does winter. With the last season showing the latter’s extremities with dark skies, frozen fields, and abandoned castles, one can note how the previous conflicts between families become futile when winter breaches their domain.

Even though Martin did not intend his novels to be an allegory of prevalent issues, one cannot help but piece their likeness to what’s happening in the world. Take for example the upcoming elections in the Philippines where political dynasty still reigns supreme. Some of those running for elective positions in the government may bear familiar surnames, and parties wage war against each other to support their candidates. But who will win the throne? Unlike the blood-drenched battles in Westeros, the Philippines operates in democracy wherein people can vote.

But although conflicts occur, there is one issue that threatens the very existence of people’s lives. Winter in Westeros may be the symbolic representation of climate change.

Some campaigns and advocacies may be noble; some detractors provoke conflicts; and political aspirants may pursue authority and influence, but there is nothing more important than taking care of the planet where humans can only possibly inhabit in this generation.

Climate change, although not heralded by a malignant entity such as the Night King, is an issue in the real world that has to be addressed. One can only see news reports about melting glaciers in Antarctica. Even if that continent is miles away from the Philippines, it doesn’t spare the country from flash floods caused by super typhoons over the past few years. If it worsens, the country’s climate might change drastically which may lead to an uninhabitable environment for its citizens.

With the season finale of Game of Thrones taking spot this April and the upcoming midterm elections this May, it is high time to think about what’s at stake if one can blend their trends. Consuming pop culture entertainment is normal for an average viewer. Voting is a right for every registered citizen. But by applying lessons taken from fiction and fantasy into the real world, one gets to realize that not much is different from the experiences of characters on-screen to those encountered by real people.

Jose Rizal knew the importance of the country’s independence in his generation. What can one do today to save it from the effects of climate change? Adhering to campaigns that address it may help, and so does choosing candidates that do not hunger for power like the vicious ruling families in Westeros.