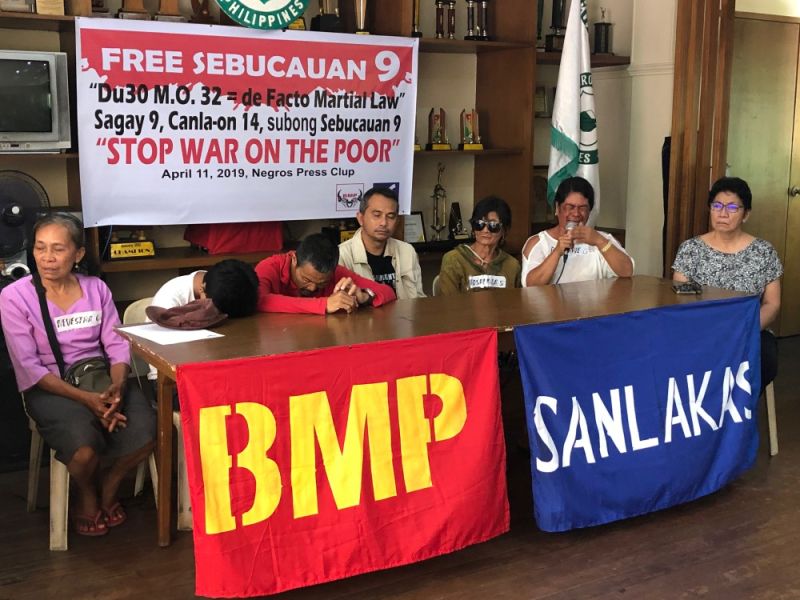 BACOLOD. Families of nine persons tagged in the killing of Councilor Jolomar Hilario in Moises Padilla, Negros Occidental, accompanied by their legal counsel, lawyer Luke Espiritu (4th from left), called on the authorities to release the "wrongfully accused individuals" in a press briefing at the Negros Press Club in Bacolod City Thursday, April 11, 2019. (Glazyl Y. Masculino)

Families of nine persons who were linked to the killing of Councilor Jolomar Hilario in Moises Padilla, Negros Occidental, demanded the town policemen to free their family members and relatives from police custody as they have nothing to do with the crime.

The families were accompanied by Bukluranng Manggagawang Pilipino (BMP) in a press briefing at the Negros Press Club (NPC) in Bacolod City Thursday, April 11.

The group strongly condemned the apprehension of the nine individuals who were wrongfully accused of the crime.

On April 2, a criminal complaint for murder was already filed against nine adults and two minors, after four of them were positively identified by witnesses and the victim's wife as suspects behind the death of Hilario, while the remaining seven persons were considered accessories to the crime.

The arrested persons availed themselves of their right for a preliminary investigation.

They were arrested after they were reportedly seen fleeing from their hideout by members of the 2nd platoon of the Negros Occidental Provincial Mobile Force Company (Nocpmfc) during clearing operations in Barangay Sebucauan, Isabela town on April 1, following a clash between the military troops and the New People's Army (NPA) in Quintin Remo Village in the neighboring town of Moises Padilla.

Nine of them are detained at the Moises Padilla Municipal Police Station, while the two minors, aged 15, were turned over to their parents for proper custody until warrants of arrest can be served to them when they reached their legal age.

Even before the filing of the case, the killing was already claimed by the New People's Army (NPA), few days after the incident.

However, the police believed that the arrested persons were among the 50 armed men who attacked Hilario inside his residence in Barangay Inolingan on March 31. But the NPA denied knowing the 11 arrested persons, whom they claimed to be workers of a hacienda in Isabela town.

As this developed, one of the two minors, whose name was withheld, told the members of the media Thursday, April 11, that they were at the sugarcane field in Barangay Sebucauan, Isabela town when they heard gunfire, prompting them to go home. However, they were sighted by the military and were told to go with them at the village hall for their safety.

But they were surprised when they were brought to Moises Padilla Municipal Police Station, where they were investigated for Hilario's death.

Three persons who were wearing face masks arrived at the police station and identified them as suspects behind Hilario's death, he said. Then, they were placed inside the custodial facility.

He stayed there for two days and one night, along with his 15-year-old neighbor, before they were turned over to the custody of the Department of Social Welfare and Development (DSWD).

"We were not even told of our rights during the interrogation, but we were unharmed," he said.

Meanwhile, lawyer Luke Espiritu, legal counsel of the accused, said the arrested persons were wrongfully accused and should be released immediately.

They are innocent and have nothing to do with Hilario's death because it was executed by the NPA, the lawyer said.

Espirirtu said the police cannot go after the NPAs, that's why they

opted to arrest the civilians for an accomplishment.

"Can the police even stand as complainant for the filing of the case on Hilario's death?" he asked.

Espiritu believed that their arrest can be considered militarization based on Memorandum Order 32 signed by President Rodrigo Duterte, directing the immediate deployment of troops to Samar, Negros Oriental, Negros Occidental, and Bicol in an effort to thwart lawless violence and acts of terror in these areas.

The MO 32 came after the recent "sporadic acts of violence" that may have been committed by lawless groups in the provinces of Samar, Negros Oriental, Negros Occidental, and Bicol.

With the implementation of MO 32, police and the army were given the power to do whatever they want without being held accountable for it, Espiritu said.

They (accused persons) are farmers and not suspects in the said crime, he said.

"We have a clear evidence that they are not behind it. Why don't they just release them?" he said.

He said they will start the filing of their counter-affidavits before the fiscal Friday.

On the other hand, Police Major Junji Liba, chief of Moises Padilla Municipal Police Station, cannot be reached for comment, as of press time.