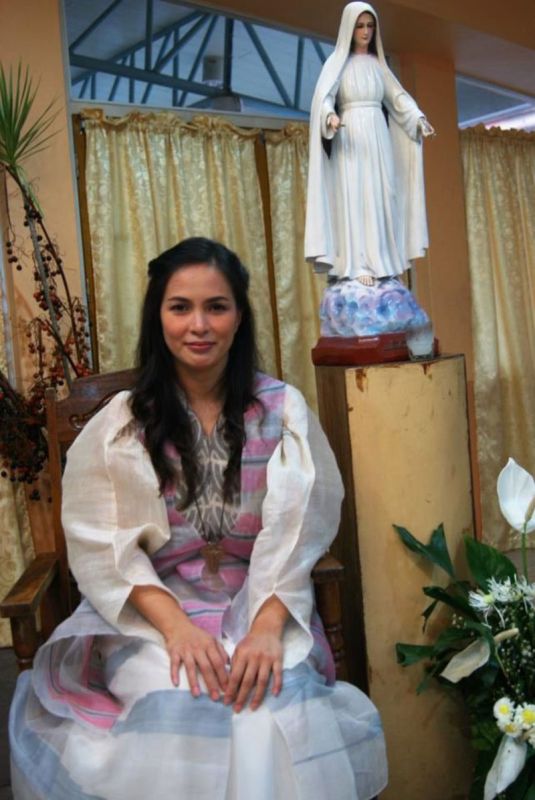 As mentioned on a viral Facebook post dated March 29, the former actress-environmentalist now goes by the name “Sister Lourdes.”

Chin-Chin was consecrated at the Carmelite Convent.

The daughter of botanist Dr. Hermes Gutierrez and former Franciscan nun-turned-painter Cecilia Arnaldo, Chin-Chin said she has always felt the call to serve the Lord throughout her life.

She recounted in a video interview Portraits in Faith on YouTube that the first major sign came to her when her philosophy professor in college challenged her notion about the existence of God.

She said, “Believe it or not, it actually touched a core in my being. The fact that we could question the existence of God in a very Catholic school.”

“Maybe nobody noticed it, but I approached my professor and asked, ‘I know this is for the grade, but is anyone going to take care of my soul while I’m at it?’”

Claudine Barretto makes a comeback via MMK this 2019.

The actress will be joined by Jameson Blake in this episode of ABS-CBN’s drama anthology series.

A fan account using the handle @longliveclaudinianseurope on Instagram posted behind-the-scenes photos of Claudine shooting scenes for her MMK comeback.

In one of the captions of the photos uploaded by @longliveclaudinianseurope, it indicated that Claudine’s MMK episode will be aired on April 27, 2019.

Claudine last appeared on MMK in December 2016 when she was cast as a Yolanda victim separated by the tragedy from her husband and kids.

She was paired back then with Dominic Ochoa as they brought life to a family who were victims of Super Typhoon Yolanda.

How was it working with Jessy?

“We’ve known each other for quite some time and it helps that we’re friends, so we became comfortable right from the start. Walang ilangan. A big part of the movie shows us just talking with each other and it’s good we have good rapport, otherwise, I think the film’s premise about two strangers relating with each other one rainy night might not work. As it is, our scenes are very relaxed, no bad vibes or conflict, chill lang, and I think we’re able to achieve that.”

They have a new director, Ice Idanan, who started with indie films and is now given the chance to helm her first mainstream film.

How is she as a director?

“She’s young so it’s easier to relate with her. Jessy and I are both thankful because she’s open to suggestions. We both have our own ideas on how to interpret our characters and how to do our scenes and she listens, she’s very collaborative. I admire her desire to come up with good visuals as she started as a cinematographer. She wants the film to look good on the big screen to really please the viewers.”

Stranded” from Regal Entertainment Inc., under the direction of Director Ice Idanan, is like a breath of fresh of air to the romance genre.

Arjo Atayde as Spencer is a normal straight guy who likes beautiful and sexy women. The only problem is he likes all of them! He wants to have a fling with them all at the same time. Yet, there is a child-like innocence in him that is disarming which will surely get the moviegoers’ empathy.

Arjo’s method of acting and delivery of lines are so natural, believable, and most of all not forced on the moviegoers that watching him act in “Stranded” was an easy and enjoyable thing to do.

Arjo has all the reason to grin. Both his career and lovelife are doing exceedingly well.

In fact, he’s also in the cast of “The General’s Daughter” playing the autistic son of Maricel Soriano.

With regard to his love life, it’s common knowledge that he’s now playing beautiful music with Maine Mendoza and they don’t hide it at all.

PERSONAL: Today is the christening of Liam David. His proud parents Prince David and Merian Mendoza would like to soulfully welcome their son into the Christian world! The christening will take place at the Our lady of Fatima in Angeles City and reception will follow at JTL Resort also in Angeles City.