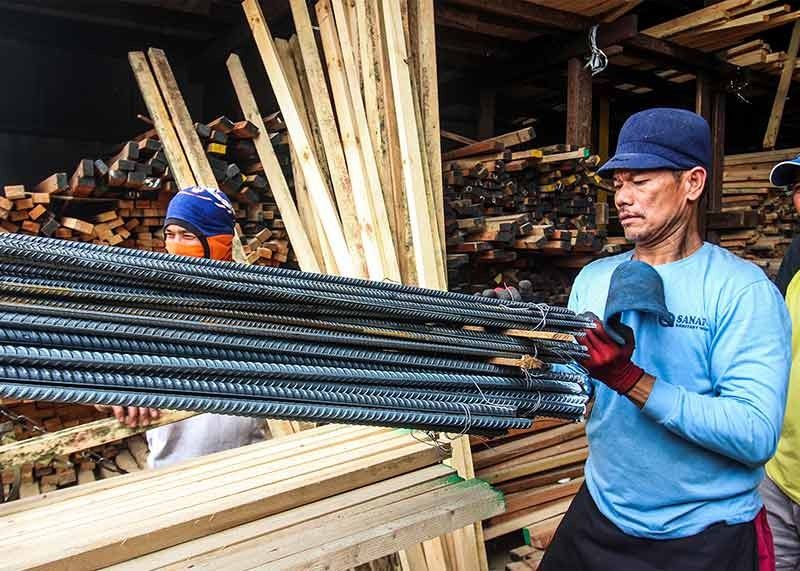 BAGUIO. A worker checks on the quality of rebars sold at a hardware store after the Philippine Iron Steel Institute (PISI) reported to the Department of Trade and Industry (DTI) that substandard concrete reinforcing steel bars are being sold in several hardware stores in Baguio City, Benguet, Mountain Province and Ifugao. (Photo by Jean Nicole Cortes)

THE Philippine Iron and Steel Institute (PISI) has urged the Department of Trade and Industry (DTI) to file charges against at least four hardware stores found selling substandard steel bars.

Joel Ronquillo, PISI vice president for technical affairs, said in a report to the DTI that they visited and conducted a “test buy” at 12 hardware stores in the Cordillera Administrative Region early this year.

The substandard rebars were made by Wan Chiong Steel (WSC), which was suspended by the DTI late last year.

The 16MM Wan Chiong steel rebars at WCDJ were found to be underweight and did not meet the standard in elongation.

Other manufacturers with substandard rebars, as determined during test buys by PISI, were Real Steel, United Steel, and Maxima Steel.

The group also observed the fraudulent selling of re-rolled 7MM rebar as 8MM rebar by RDM Marketing and General Merchandise in Baguio City and 8MM rebar as 9MM rebar by Yakal Hardware in Banaue, Ifugao which are not within the standard requirements [of PNS211:2002 and PNS49:2002.]

He also urged monitoring teams to conduct actual weighing and measurement of bars to determine conformance to PNS 49:2002 and PNS 211:2002, in addition to checking of logos and markings.

The PISI report said the rebars were confirmed by the Metals Industry Research and Development Center (MIRDC) to be substandard.

Rebar, which is short for reinforcing bar, is used as a tension device in reinforced concrete that strengthens and aids the concrete under tension. Concrete is strong under compression, but has weak tensile strength. Thus, rebar significantly increases the tensile strength of the structure.

Ronquillo offered PISI’s services to the DTI to stop the deceitful selling practice of some hardware stores and prevent the proliferation of substandard reinforcing steel bars in the market. (Maria Elena Catajan)