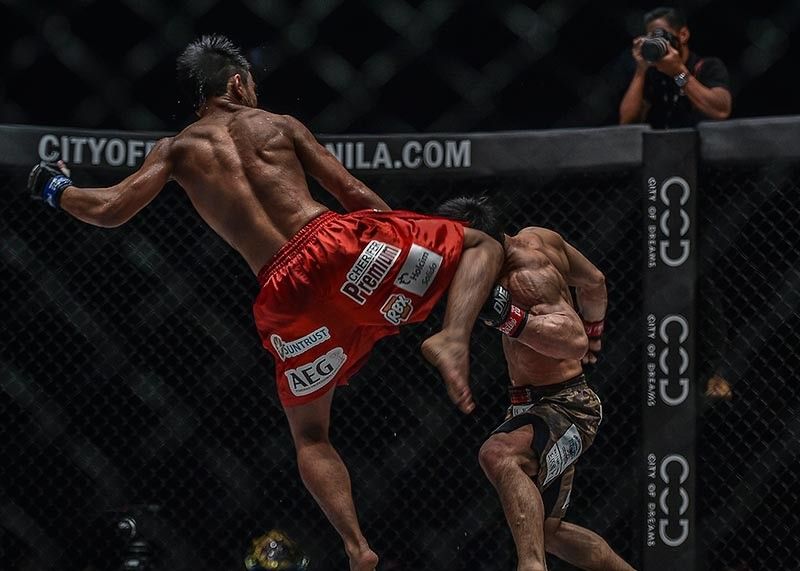 SLEEPER KISSER. Joshua Pacio connects with a kick to the head to stop Yosuke Saruta in their rematch during the co main event of One Championship’s ‘Roots of Honor’ at the Mall of Asia Arena Friday evening and reclaim the ONE strawweight world title. (ONE Championship photo)

JOSHUA Pacio reclaims his strawweight world title in front of a cheering Filipino crowd while Edward Kelly survived a tough challenge as he returns to the winning circle.

Pacio scored a fourth round monstrous knock out of Yosuke Saruta in their rematch during the co main event of One Championship’s ‘Roots of Honor’ at the Mall of Asia Arena Friday evening.

In front of a raucous and partisan crown, Pacio thank all the supporters of Team Lakay offering his victory to all Filipinos.

“I’m so speechless. First of all I would like to thank God for the strength and to all the kababayan who came to support,” Pacio said.

After three less action packed three rounds, the crowd inside the MOA Arena unglued when Pacio connected with a sensational head kick that put away the Japanese world champion.

With the home crowd roaring in his favor, Pacio opened the first round with a huge spinning back kick to his rival’s midsection.

Saruta survived and then countered with a takedown to slow the action, but he could not keep the local hero grounded for long.

Back on the feet, both athletes were looking for the perfect opportunity to unleash their striking combinations but the pace slowed down in the second frame.

While Pacio was surprised his Japanese rival was willing to stand and engage with him on the feet, both fighters started to pick up the action again in the third. Saruta mixed up his attack a little bit more, as he hit a takedown and kept the Baguio City native guessing throughout the five-minute period.

Pacio was more passive, but managed to fire off stinging leg kicks and counter punches any time the Tokyo resident moved forward but could not find a home for his head kicks in the round.

Luck, however, would change in the fourth stanza as Pacio patiently waited for the right time to unleash one of his trademark strikes.

That time came halfway into the period, as the 23-year-old uncorked a devastating head kick just as Saruta started to move forward with an overhand right.

As soon as Pacio’s knee connected with his adversary’s temple, Saruta fell face-first onto the canvas.

Referee Kemp Cheng immediately jumped in and waved off the contest at 2:43 of round four.

“Just like what I said the last time we face each other, there were a lot of hesitations and I just followed our game plan for tonight,” added Pacio.

Fellow Team Lakay Kelly meanwhile announced his return to the winning circle with a second round stoppage of Sung Jong Lee.

The match got off to a fast and furious start as Lee shot immediately for a takedown so he could begin his submission offensive. Almost as soon as the NAGA No-Gi Grappling Champion took Kelly to the ground, he started to threaten with a rear-naked choke.

However, Kelly was prepared for Lee’s grappling attack, and he powered out of his predicament and swept his rival to wind up on top as the partisan Filipino crowd erupted.

Kelly was not out of the woods for long, as the South Korean dived for a leg to threaten with a kneebar. Kelly stayed in the contest by deciding attack was the best form of defense, and he teed off with a plethora of punches to the head.

The Team Lakay fighter recognized the danger Lee posed with his grappling, and wisely worked to get the action back up to the stand-up realm, but Lee was persistent with his chain-wrestling.

In the second round, the two warriors picked up from where they left off and as Lee pursued the heel hook while Kelly turned up his offensive output and unloaded a torrent of strikes.

After a near-minute of absorbing damage, Lee faded and started to offer no intelligent defense or retaliation, which caused the referee to call a halt to the action at 2:51 of round two.

“I knew that he was a leg lock specialist, but I was confident I could escape. The legs of Filipinos are strong enough to survive that,” he said.

With the victory, Kelly improved his record to 12-6 and maintained his 100-percent finishing rate in the world’s largest martial arts organization.

Kicking off the action at ONE: Roots of Honor, Filipino flyweight Ramon Gonzales continued his impressive run in ONE Championship by making quick work of Japan’s Akihiro Fujisawa with a submission in the first round.

Fujisawa attempted a takedown early in the first round but found himself getting caught in a deep guillotine choke. Gonzales postured up and tightened the choke, forcing Fujisawa to tap out abruptly.

Edward’s older brother Eric meanwhile was unfortunate in his return to ONE after a first round technical knockout loss against Kwon Won Il of South Korea.

Kwon landed a well-placed right straight that rocked and dropped Kelly. The Korean prospect finished things off with some ground-and-pound for the stoppage win in just 19 seconds.