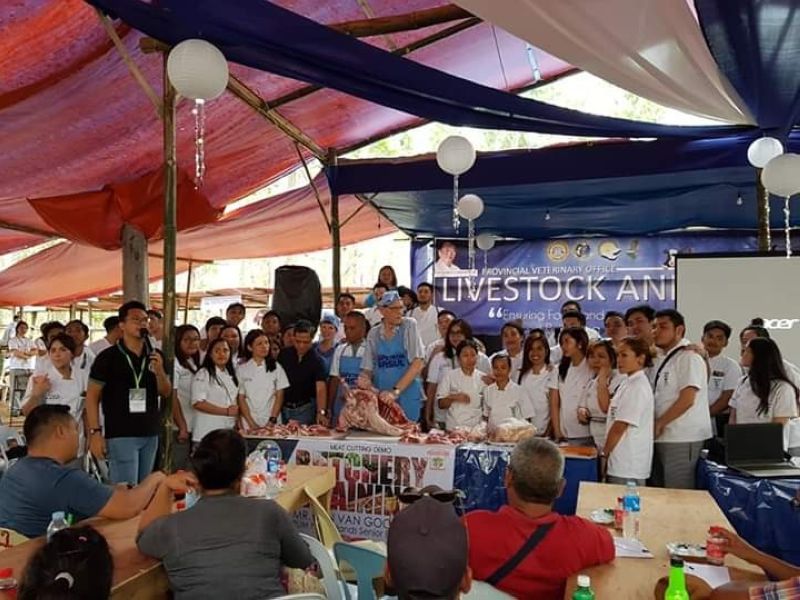 BACOLOD. Livestock and poultry raisers attend a seminar on deboning and meat cutting demonstration by Dutch butchery expert Jan Van Goor during the recent Panaad sa Negros Festival in Bacolod City. The activity was also participated by the students of Institute of Culinary Arts students and local paravets. (Contributed Photo)

LIVESTOCK and poultry raisers in Negros Occidental received updates on the latest practices and technologies through a series of seminars initiated by the Provincial Veterinary Office (PVO) during the just-concluded Panaad sa Negros Festival.

"These seminars are also aimed at ensuring higher production of livestock and poultry commodities," he added.

The topics during the series of seminars from April 8 to 14 included organic black pig production, biosecurity measures for farms, gamefowl management and diseases, and meat cutting demonstration.

In terms of technology, participating farmer-raisers were also updated on vaccination, breeding and artificial insemination.

On diseases, the PVO underscored the threat posed by the African Swine Fever (ASF).

"Though such disease has not affected yet the province, we need to prepare our raisers especially on the precautionary measures," Janoya said, stressing that "a huge swine industry in Negros Occidental is at stake."

For Provincial Veterinarian Renante Decena, the province's status as one of the top producers of backyard swine in the country is attributed to the organization of industry stakeholders especially raisers.

Decena said the Alliance of Hog Raisers Associations in Negros Occidental (Ahrano) is currently composed of about 14,000 member-raisers.

"The growth of our swine industry is also attributed to the continuous implementation of our Provincial Animal Genetic Improvement Program," he said, adding that improving local stocks is vital in ensuring better production output.