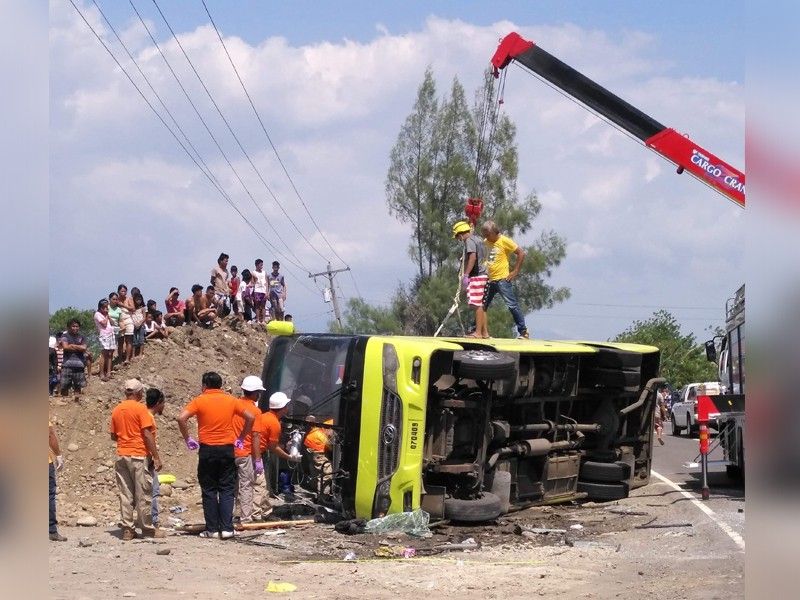 A WOMAN died, while 40 others were injured after a Ceres Liner bus fell on its side in Purok Kapayas, Barangay Pacol, Bago City, Negros Occidental Monday, April 15.

Of the wounded victims, six sustained serious injuries and were transferred to different hospitals in Bacolod City. A two-year-old boy was also brought to a hospital in the city but he was not severely harmed.

The remaining 33 passengers sustained minor injuries and are also confined at a hospital in Bago City.

Severino said the bus driven by Aimer Paro, 28, of Sipalay City, was on its way to Barangay Maao, Bago City from Bacolod City when it suddenly fell on its side.

Severino said the bus was not speeding when the accident happened at the curve portion of the road at 1 p.m.

It was probably due to a human error because there was no engine trouble detected based on the investigation, Severino said.

It was on how he drove the vehicle because we saw skid marks on the left side of the road, he added.

The accident caused more than two hours of traffic but it was addressed through the help of some force multipliers, he said.

Severino said it took an hour for rescuers to retrieve the body of Ana May Declaro, who was found under the bus.

She was seated near the window and was probably sleeping when the accident happened, he added.

The bus driver sustained bruises and wounds on his hands. He is detained at Bago City Police Station for filing of charges for reckless imprudence resulting in homicide and physical injuries.

He will be released after the lapse of the 36-hour reglementary period if the complainants failed to press charges against him.

For his part, Paro said he applied brakes when he felt something on the vehicle while it was moving, however, the bus suddenly fell on its side.

Meanwhile, the management of Vallacar Transit Inc. (VTI) immediately dispatched their personnel to check the condition of the victims at various hospitals.

Jade Marquez Seballos, legal and media relations manager of VTI, said they will be extending assitance to the victims.

They will give P200,000 to the family of the deceased passenger while the bus company will also shoulder the medical expenses of those victims confined at hospitals.

Seballos also said that the bus company will conduct a separate investigation on the incident to take the necessary action against the driver.

"We will not tolerate his action if proven guilty of an offense. He can be fired from his work," she added.