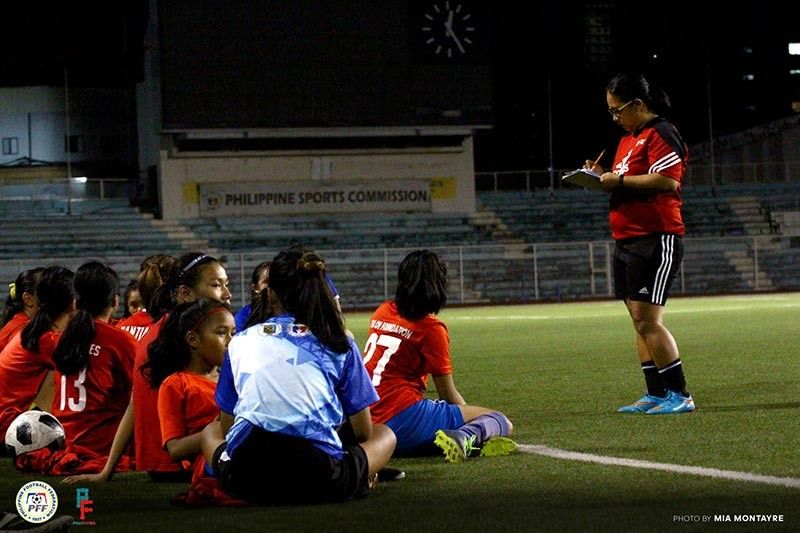 MANILA. Philippines U15 Girls National team head coach Rachelle “Ching” delos Reyes of Davao City heads the Manila tryouts for the team that will compete in the Asean Football Federation (AFF) U15 Girls’ Championship 2019 set May 9 to 22 in Chonburi, Thailand. (Mia Montayre/PFF/Pinay Futbol)

THE last time Davao City coach Rachelle “Ching” Delos Reyes was called for national duty was in 2008. She was an assistant then. But this time, she will be calling the shots after having been appointed as head coach of the Philippines U15 Girls National Team (U15 WNT) for the Asean Football Federation (AFF) U15 Girls’ Championship 2019 set May 9 to 22 in Chonburi, Thailand.

Delos Reyes, a former national team member and board of director of the Davao South Regional Football Association (DRFA), was appointed as head coach of the U15 WNT from March to May 31, 2019.

As head coach, Philippine Football Federation (PFF) general secretary Edwin Gastanes, in his March 1, 2019 letter to Delos Reyes, said she will discharge duties traditionally attached to the position, including submission of a technical report after the competition. She will be duly compensated for her coaching services during the term of her appointment.

“Very privileged kaayo kay gihatagan nila og opportunity ang mga provincial coaches (It is a great privilege that they have given provincial coaches this opportunity),” she, who was supposedly coaching the Davraa girls futsal team to the Palarong Pambansa 2019, said in a Facebook interview with SunStar Davao.

Delos Reyes added that in the past few years, she and Barinan helped produce players to the national team in recent years and this, she said, was among the considerations of national football coaches Marlon Maro and Aris Caslib to choose them for this AFF U15 undertaking. Maro and Caslib called Delos Reyes in February about the appointment but Delos Reyes only committed to take on the job last March 13.

It can be recalled that Delos Reyes was assistant coach in the Philippines U13 girls team in 2008 where Davao City players Nina Arrieta, Janna Barcemo and Nina Yanto, who are currently playing in the UAAP for the University of Santo Tomas, were also members.

A total of 29 players underwent initial stage of the training camp and the number was reduced recently.