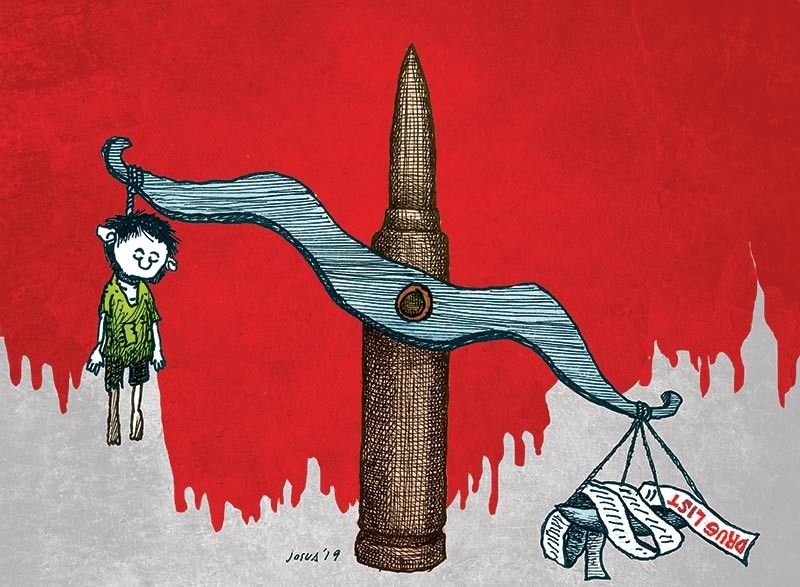 Sunday night, April 14, the couple and their nine-year-old daughter on motorcycle stopped at a red light on A.C. Cortes Ave., corner S.B Cabahug St., in Barangay Ibabao, Mandaue City, when two men on motorcycle shot them. First Michael, then the gunman alighted and promptly shot Fraldine Kate next. The daughter survived. The whole action was caught on CCTV, the execution done with the ease of a natural. The killers sped off, faceless and unrecognizable in their full helmet.

The CCTV footage gives the public a visual illustration of how killings of this nature are carried out. Two men on motorcycle, breezing by with a couple of gunshots, and speeding away leaving the fallen dead in a pool of blood. The neatness of the execution oftentimes makes you forget the obscenity of the murder.

Worse, the usual police narrative blurts out the buzz phrases “in the drug watch list” or “victim has links to illegal drugs” and it would, in the ears of a less discerning public, sound like “end of story.” Everyone can now use some rest, just another miscreant banished from the face of the city.

And this is where the danger is. “Linked to drugs” is that one lazy, malicious imputation over the dead. The ascription has become a police habit, and it’s one narrative that reeks of scheming manipulation of public perception. The government’s war against illegal drugs is still backed by legions. It casts a long shadow, and the police seems to tuck every slay story into that narrative.

Every dead person that these riding-in-tandem bogeys leave sprawling by the roadside was once a son, a father, a brother, a mother, daughter. This “drug link” story dehumanizes not only the victims, but the very culture that we’re in. It erodes the things that we’re supposed to uphold if we are still to live in safer communities: “human rights,” “due process,” “innocent until proven guilty.”

For this reason, the media, the public at large, if we are to dish a tale in the scheme of things, must veer away from the usual police story, to not buy it hook, line and sinker. To bring to the fore the human tale in each of the killing in the city. To save the community from the numbing versions of a looming police state.