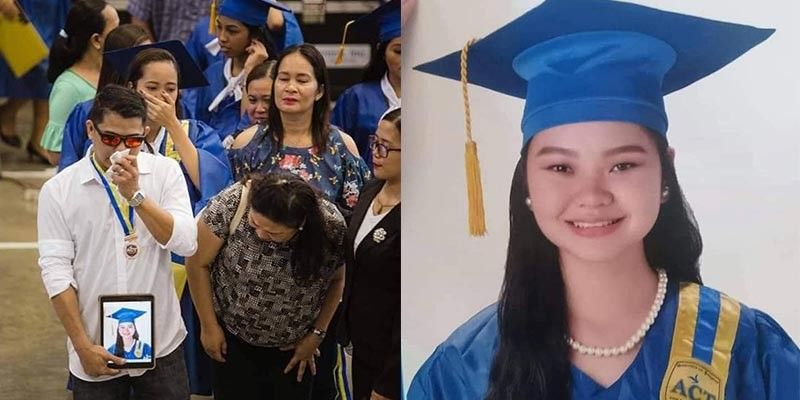 GOODBYE. Arturo Tecson could not stop his tears as he walked to receive the medal of his daughter. (Contributed photo / Arturo Tecson)

ALLYZA Marie Tecson continued working on her school project even if she was confined in the Talisay District Hospital (TDH).

Allyza, however, was not the one who accepted her medal--it was her 41-year-old father Arturo Jr. who stepped on stage during the commencement exercises on April 4 at ACT’s main campus in Cebu City.

Allyza had died of dengue fever three weeks before her graduation. She was the eldest in a brood of five.

Her untimely death cut short her dream of becoming a flight attendant.

When her condition worsened, Allyza was transferred to Chong Hua Hospital in Cebu City.

Arturo said he cried while watching through video chat his daughter being revived by doctors.

At the time, Arturo was in Riyadh, Saudi Arabia, where he was working as a surveyor for a telecommunications company.

According to Arturo, his daughter had a fever for three days. The doctor later confirmed she had dengue fever.

Before Allyza was admitted to the TDH, Arturo said he communicated with his daughter through a video call on March 12. He asked about the school project with her group.

He then told his daughter to complete the project on the following day.

On March 13, Allyza was admitted to TDH. She died two days later.

Arturo, whose family comes from Tacloban City, believed that the supertyphoon Yolanda was the biggest challenge he overcame in his life.

The deaths of Allyza and his six-year-old daughter Ariza Artheena, who died of sepsis two years ago, were the biggest tragedies in his life.

During the graduation ceremony, Arturo said he tried to stop himself from crying because he did not want to dampen the celebration of the other graduates.

Arturo’s older sister Maureen Tecson-Dakay, who had advised him not to cry on stage, was the one who broke into tears.

After seeing his sister crying, Arturo was overwhelmed by his emotions. He cried.

Students and teachers also cried. Others cheered Arturo and his family.

“I was so happy. I was so relieved. Anak, daghan kaayo ni-support nato. This one’s for you, anak! I will be strong. Papa will be brave just for you. Just help me,” Arturo said while pointing his finger upwards.

Dr. Ronald Jarvik Buscato, medical officer III of the Department of Health (DOH) 7, in a forum on April 16, Tuesday, said the rising number of dengue cases in the region is already “alarming.”

The Regional Epidemiology Surveillance Unit recorded a total of 6,521 dengue cases in the region.

This is 252 percent higher compared to the same period of last year with only 1,851 cases and 12 deaths.

“This is alarming. We are actually placed at the top spot sa entire Philippines. We have the highest number of cases and deaths. Majority of our cases are still from Cebu City, Lapu-Lapu City and Mandaue City,” Buscato said. (KAL/WBS)