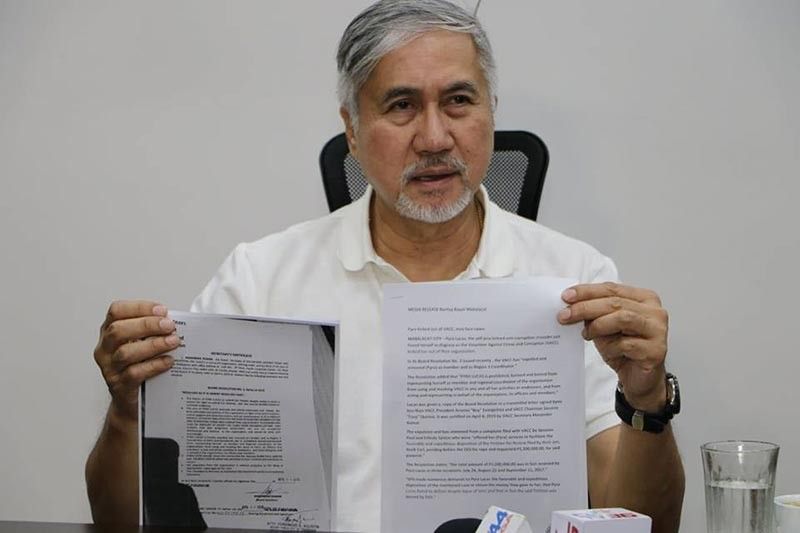 PAMPANGA. Volunteer Against Crime and Corruption (VACC) president Arsenio “Boy” Evangelista shows Board Resolution No. 3 which expels and removes Pyra Lucas as a member of VACC, during a press conference at Bale Balita, Clark Freeport Zone, Tuesday, April 16. (Photo by Chris Navarro)

THE Volunteers Against Crime and Corruption (VACC) has received numerous complaints against its former Pampanga coordinator, Pyra Lucas.

This was disclosed by VACC president Arsenio "Boy" Evangelista during a meeting with Pampanga-based newsmen on Tuesday, April 16.

"For the record, she is no longer connected with the organization VACC. She was actually told that because her acts are so serious that undermines and violates the basic principles and policies of the organization to fight crime and corruption," Evangelista said.

"Actually, Aaron Aquino when he was director of Region 3 police, he had complaints. So upon learning that we expelled Pyra (Lucas), he said you should have done that a long time ago. The man (Aquino) really felt that he's being attacked, his personality. She created a lot of stories against Aaron that time," Evangelista said.

Evangelista said they were also surprised upon learning that Lucas is running for councilor of Mabalacat City. "It was really a big surprise for us because it is our agreement that if you are running for a public position you have to resign or at least tell the organization in advance that you are running," he said.

VACC is apolitical or non-political and this is the reason why Dante Jimenez, now the Presidential Anti-Corruption Commission chairman, resigned from his post as the volunteer group's chairman, Evangelista added.

Evangelista also questioned the legality of the creation of VACC chapters in Mabalacat City in Pampanga, Bamban town in Tarlac, Angat in Bulacan and other parts of Central Luzon. According to the VACC official, Lucas has no authority to create chapters.

Evangelista said Lucas was recently expelled by the VACC Board after she allegedly received P1.2 million from spouses Rurik Paul Santos and Erlinda Santos in exchange for services to facilitate the resolution of the Petition for Review of a rape case filed by their son, Rurik Earl, which is pending before the Department of Justice.