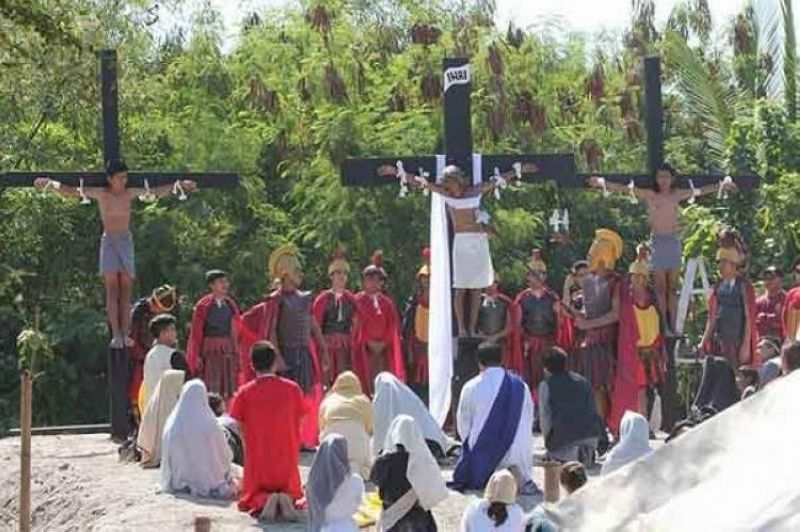 PAMPANGA. In this photo taken in 2007, three men took part in Maleldo, Pampanga's version of the Passion of Christ. (File photo)

THE executive committee of Maleldo 2019 told candidates in the coming May elections to respect the solemnity of the decades-old Lenten tradition of Fernandinos by sparing it from electioneering.

Maleldo 2019 executive committee chairperson Robbie Hizon asked for the cooperation of the candidates as they will not allow any forms of campaigning during the observation of the Maleldo Lenten rites.

He said all tarpaulins and campaign paraphernalia both of local and national bets posted along the route of the “Via Crucis”, or Way of the Cross, have been ordered removed by the concerned village chiefs.

“Lahat ng mga tarpaulin at posters doon sa dadaanan ng Via Crucis papatanggal lahat. Ibabalik nalang pagkatapos ng Maleldo. We are allowed to do that because campaigning is really not allowed during Good Friday, and we just don’t want any candidate to take advantage of our solemn tradition,” he said.

Moreover, Hizon said they will not also allow the giving away of free bottled water and fans with the names or pictures of candidates during the event as it is also considered as a form of campaigning.

Officials or candidates who wants to visit or witness the Lenten rites will be welcomed but will not be given the platform to campaign or speak before the public, Hizon furthered.

The Maleldo Lenten rites is expected to draw about 20,000 local and foreign tourists who will witness actual crucifixions at the makeshift Calvary in Barangay San Pedro Cutud, as well as in the villages of San Juan, Sta. Lucia, and the newly-participating site San Nicolas.