Rise of the old: Bohol’s rebuilt churches for Visita Iglesia 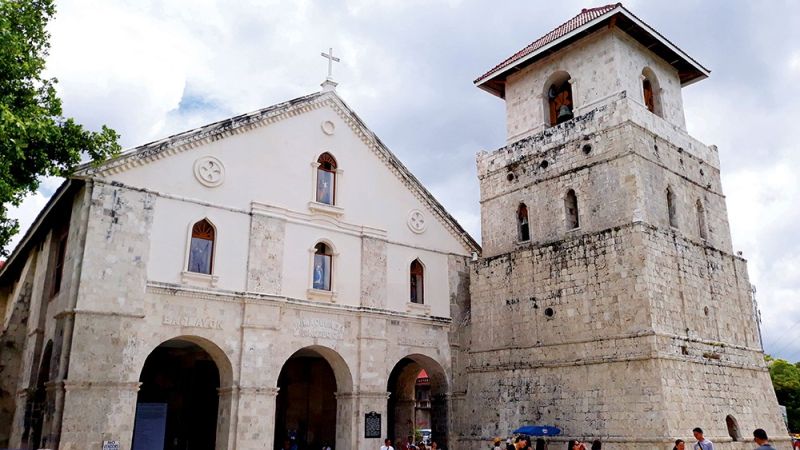 TEST OF TIME. One of the oldest churches in the country, the Immaculate Concepcion Church in Baclayon. 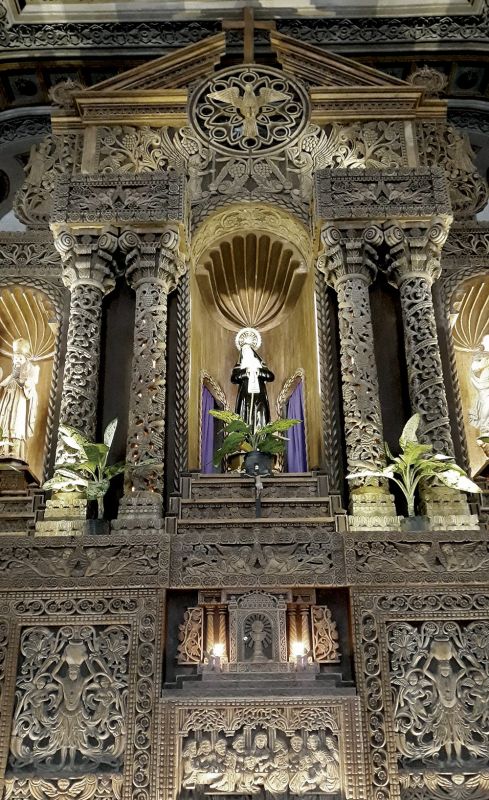 DETAIL. The intricately-carved wooden retablo inside the Santa Monica Church in Alburquerque. 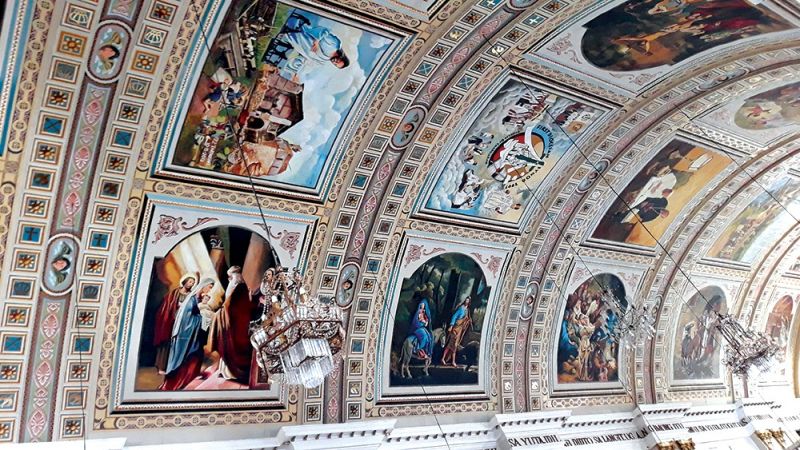 CEILING PAINTINGS at the nave of St. Joseph the Worker Cathedral in Tagbilaran. 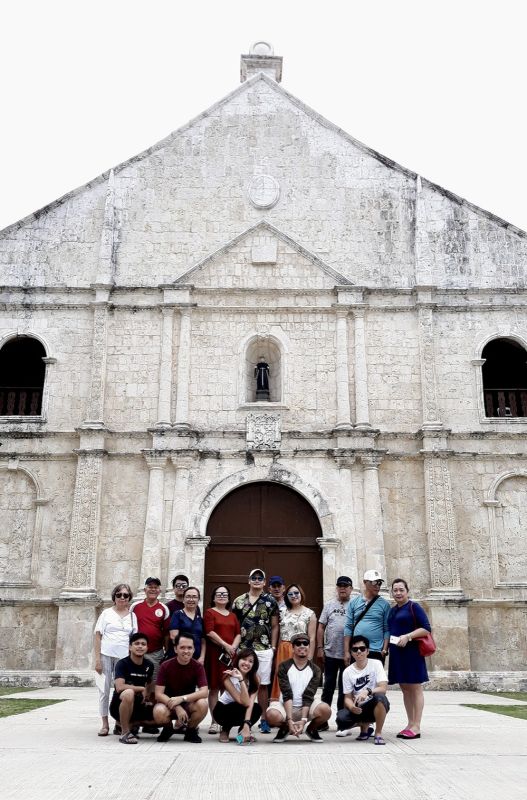 TREASURE. The family in front of the last church on our Bohol Visita Iglesia itinerary, the San Nicolas de Tolentino Parish Church in Dimiao. The church was declared a National Cultural Treasure by the National Museum in 2011. 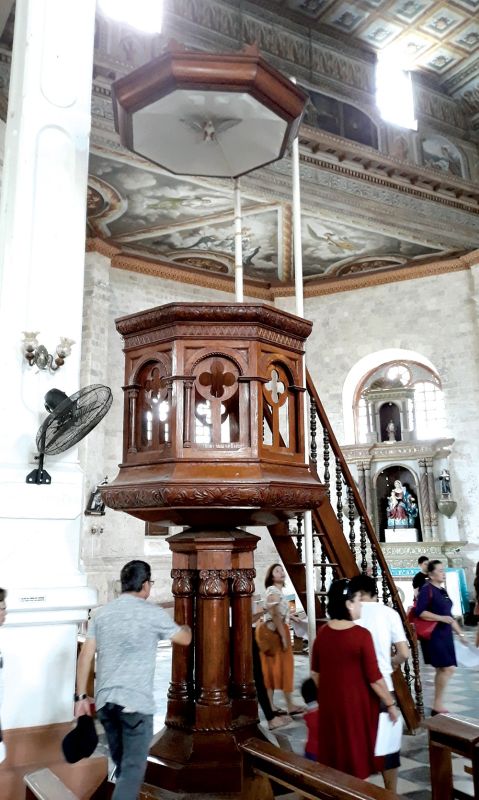 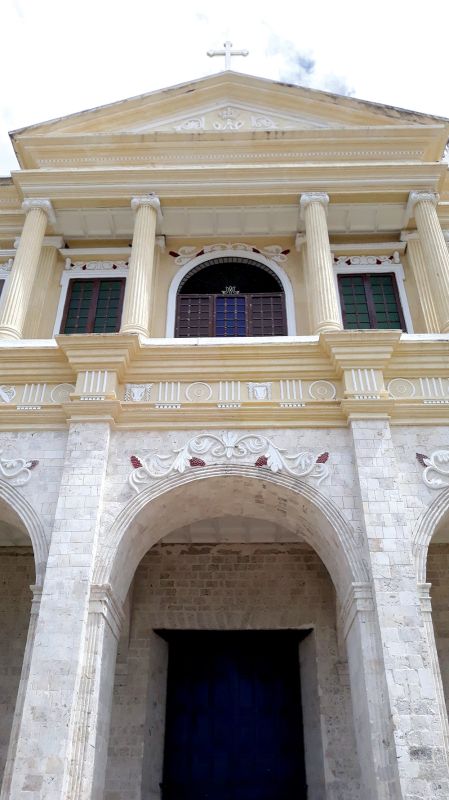 FACADE of the rebuilt 18th-century Our Lady of the Assumption Church in Dauis.

APART from the pristine resorts and the picturesque Chocolate Hills, the island of Bohol is known for its Spanish-colonial churches. These stone edifices that have served as testaments of the strong religious faith of the locals, can rival the iconic medieval and Baroque buildings of Europe.

Thus, when the strong earthquake, whose epicenter was in one of the towns of Bohol, shook majority of the Visayas region in October 2013, it raised concerns among locals. Heritage lovers especially, when they saw most of the old churches in the island suffered serious damage. But the love for local heritage was strong, especially among residents and architects, that rebuilding plans were immediately underway.

When the family began planning an out-of-the-city pre-Holy Week Visita Iglesia, our first since 2016 when we visited churches in the southern Cebu towns, Bohol instantly came to mind. Just a two-hour fastcraft ride from Cebu, it would afford us some time to relax at the beach after our visit to the churches.

True enough, thanks to an itinerary by an architect friend based in Tagbilaran, we were able to plot the most accessible churches from our start off point at the port. We finished just in time for a river cruise lunch and check-in at our hotel in Panglao.

Modern church. The first church we visited was different from the six other churches on our trip that day. The Our Lady of Lourdes Parish in Tagbilaran stood out with its triangular profile with abundant fenestrations, cascading light inside its airy interiors, unobstructed by columns.

Colonial charm. The next churches embodied the beautiful Spanish-era look that seemingly transports one to a bygone era. Most of these old churches were partly destroyed by the strong earthquake six years ago and have been rebuilt with renewed commitment to serve as important venues for the activities of the Catholic faithful.

Just a few minutes drive from our first stop was the St. Joseph the Worker Cathedral, located along Bohol’s principal street (Carlos P. Garcia ave.), just across the Capitol. It is touted as one of the most important Jesuit churches in the island. Although the church was turned over to the Augustinian Recollects and had been reconstructed throughout history, its newly-painted ceiling is a sight to behold. The artwork, although done in recent years, fills the entire vaulted nave ceiling and the dome highlighting the crossing of the church’s nave and transept.

Another notable feature in colonial churches is the richly-decorated altarpieces or retablos, which architecturally highlight the importance of the space inside the church where the altar is located. Among the most beautiful retablos would be found in our fifth stop, in the municipality of Alburquerque, at the Santa Monica Church. Built in the late 1800s, the main church building is somehow distinct, connected to its convent through a graceful arcade with a footbridge on top of it. Inside, one will find the intricately hand-carved wooden altarpiece, enshrining its patron saint on the central niche.

The pulpit is another distinct feature of old churches here. In the absence of modern sound systems, there was a need for priests to make their sermons more accessible to the attendees of the Holy Mass. So they usually made their discourses at the pulpits, which are elevated enclosed stands attached to the wall or main pier along the congregation area of the church. The Church of Our Lady of the Assumption in Dauis, built in the late 1600s, still has its original wooden pulpit, which is now free-standing.

Our fourth stop, the Immaculate Concepcion Church in Baclayon, which was constructed in the 18th century, has its pulpit on the right corner wall of the main congregation area. Baclayon church’s famous free-standing bell tower near the main entrance was completely rebuilt after it was destroyed by the earthquake.

It was great to see these important historical landmarks rebuilt and unperturbed by too much modern developments surrounding it. These churches, having been rebuilt numerous times after being damaged by fire, earthquakes, storms and conflicts, are enduring proof of the faith of the people, especially in rising up from challenges that come their way.