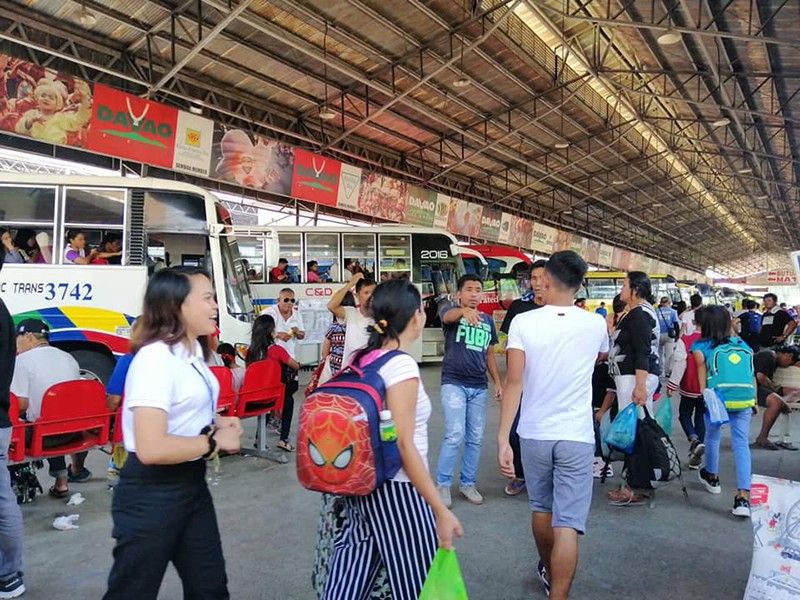 THE Davao City Overland Transport Terminal (DCOTT) is expecting 75,000 passengers per day to depart to and arrive from different provinces during the Holy Week.

DCOTT head Aisa Usop said about 1,500 buses per day will be deployed to cater the large volume of passengers.

She said along with All Souls Day and Christmas Day, Holy Week is one of the busiest holidays for DCOTT.

"Per day, our normal bus trips everyday would range from 650 to 700 buses, equivalent to 35,000 to 40,000 passenger rides," Usop said during the AFP-PNP press conference at the Royal Mandaya Hotel.

However, she said, the figures were based from previous years, and that her office will not be complacent, both in security and bus deployment.

Usop said the Land Transportation Franchising and Regulatory Board (LTFRB) has already issued 40 special permits to accommodate larger passenger volume. However, she said additional permits would still be issued to meet the demands.

Usop said the Davao City to Cagayan de Oro route is one of the busiest routes from the terminal.

She said in a previous report that most passengers are taking advantage of the holiday break to travel.

The DCOTT head also assured the public that they are also monitoring the condition of both buses and bus operators, to ensure the safety of the passengers.

Usop said that the Land Transportation Office (LTO) had temporary confiscated their license, while the investigation is ongoing.