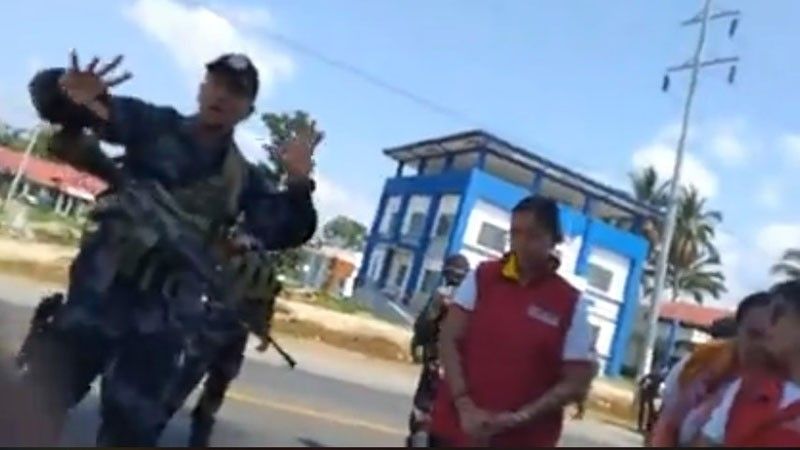 CAGAYAN DE ORO. A video screen capture from one of the members of “Kalbaryo sa Kabus (ordeal of the poor)” partly shows an exchange of arguments between its members and police officers and the municipal social workers of Manolo Fortich, Bukidnon, on Friday, April 19. Authorities want the children to be kept within the municipal social workers’ compound if the group decides to continue their protests going to Cagayan de Oro. (Video courtesy of Kalbaryo sa Kabus)

GOVERNMENT authorities may file trafficking charges against progressive groups that organized a protest caravan starting from Bukidnon to Cagayan de Oro, but it cannot win the case, an official of a law group said.

Lawyer Beveryly Musni, lead representative of the National Union of Lawyers in the Philippine’s Northern Mindanao chapter, said that during the protest of “Kalbaryo sa Kabus (ordeal of the poor),” parents were present along with their children.

“DSWD’s (Department of Social Welfare and Development) charge of trafficking will not hold water in court as the DSWD would have to charge the accompanying parents of trafficking,” she said.

“Despite their parental authority over the minors and the caravan being for a legitimate purpose, as this is an exercise of the peoples’ rights to travel, assembly and express grievance to the government, not for trading nor selling these minors to prostitution, pornography and other illegal acts prohibited under RA (Republic Act) 7610 - the anti-child abuse law,” she added.

Oliver Inodeo, one of the information officers at the DSWD Regional Field Office-10, clarified that the social workers who took part in the barricading of protesters on April 19 were from the municipal social work and development of Manolo Fortich in Bukidnon.

On that day, around 300 farmers and Indigenous Peoples from Bukidnon who are part of the “Kalbaryo sa Kabus” series of protests, were barred at a checkpoint by police authorities, who brought along government social workers.

The police and social workers want the children to stay within their premises, should protesters want to continue traveling to Cagayan de Oro, but the group did not agree.

Reports said government forces were allegedly looking for a communist rebel who was allegedly in the group.

But, farmers insist they were peasants who wanted to show the government their worsening plight due to intense militarization in their communities in the face of martial law in Mindanao.

In a statement, the Police Regional Office (PRO)-Northern Mindanao said it respects every person’s right to travel, peaceably assemble and petition the government for redress of grievances.

However, the police said it cannot allow flagrant defiance of the law, breach of peace and disorderly conduct in a supposedly peaceful and tranquil day of the lent.

“Hence, the group identifying themselves as members of dubious IP and peasant organization of Bukidnon on their way to stage a rally in Cagayan de Oro City were stopped by PNP personnel at Manolo Fortich checkpoint for routine public safety and security check,” PRO-Northern Mindanao said, through Lt. Col. Surki Sereñas, the spokesperson.

Police said government authorities are also ensuring that the group is not violating the law on trafficking in person and RA 7610.

“They are free to go as soon as they are cleared of any unlawful infraction,” police said.