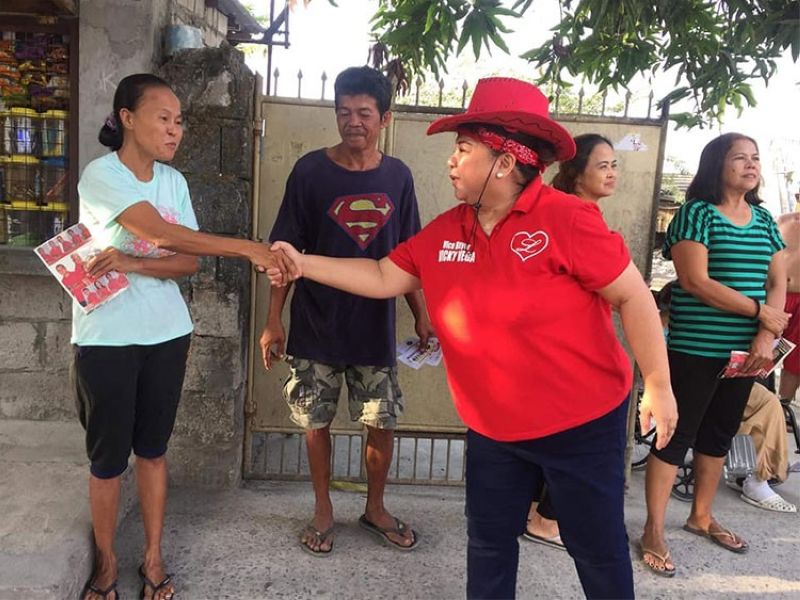 PAMPANGA. Maria Vicenta “Vicky” Vega Cabigting, who is running again for vice mayor of Angeles City, shakes hand with a voter during a house-to-house campaign. (Photo from Cabigting's Facebook page)

A FORMER vice mayor of Angeles City has asked residents to vote wisely and pick candidates with clear programs for the people in general.

Maria Vicenta “Vicky” Vega Cabigting, who is running again for vice mayor under the slate of mayoralty candidate Councilor Carmelo “Pogi” Lazatin Jr., made the appeal during a media forum dubbed News at Hues hosted by the Pampanga Press Club and the Park Inn by Radisson Clark.

Cabigting added that she already experienced running against wealthy and popular artists in the vice-mayoralty race.

But with God’s grace and support of the people, Cabigting said she is always elected to head the city council.

The vice mayoral candidate also asked the people to support her runningmates under the Team Lazatin and Partido Federal ng Pilipinas including Councilor Lazatin for mayor, reelectionist Pampanga First District Congressman Carmelo “Jon” Lazatin and their candidates for councilor.

According to Cabigting, their team is committed to push for various programs on health, peace and order, women empowerment, education, vehicular traffic solution, environmental protection, waste management, among others.