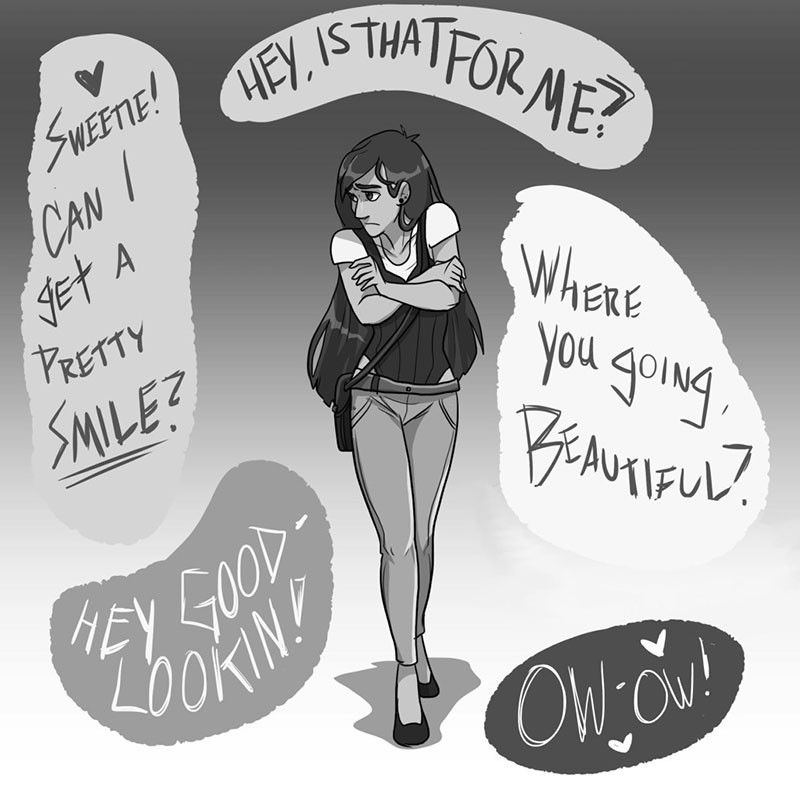 Illustration by Victoria Courtney; originally published in The Journal (websterjournal.com)

“MISS beautiful”, “Ate sexy”, and “lamion” are names women usually hear from some men we bump into the streets, from men who are driving a truck or a car, or from men who are just drinking in front of a store.

Catcalling is uncomfortable and it is also disrespectful. This is something that I and other women have encounter numerous times.

It is like some sort of habit that has become a minor thing to other people. But do they know the feeling of a woman who has been a victim of this form of sexual harassment?

I have been catcalled countless of times.

One is when my friends and I were walking in a pathway along our school when suddenly a small truck passed by and someone shouted “Gwapa! Gwapa!,” well of course as a human who has reflexes, I unconsciously looked at the direction of the voice that is calling and saw a guy in the passenger seat of the small truck, he smiled in a very creepy way, winked at me and pulled out his hand and gave me the middle finger.

I wanted to burst out of anger and run to follow that small truck and pull that man out of his seat.

Some say that catcalling is a form of sexual harassment that is not harmful, but little did they know that this thing could lead to a fear of what could happen next. Catcalling is a “first move” where it could lead to further abuse. Many other women experience this and I am wondering about how they are coping up with this.

The more we ignore the problem, the more it could get big. Surely there is already a proposed law here in the Philippines with regards to catcalling which is the Senate Bill 1326 or the Safe Streets and Public Spaces Act of 2017.

For me, the proper thing is to educate the people who are catcalling. They should be educated about the effects of what they are doing. The deed should start with the violators and not the victims.

All I wanted to say is that we have proper names and if the people that we walk on the streets with do not know our proper names, then I suggest that you should stop calling us names we do not own, because honestly, it is not funny.

To those people who has this habit of “catcalling”, why don’t you discipline yourselves and live as a normal human being because in that way no one would be disrespected. (Lariss Maxinne Lopez, Usep intern)