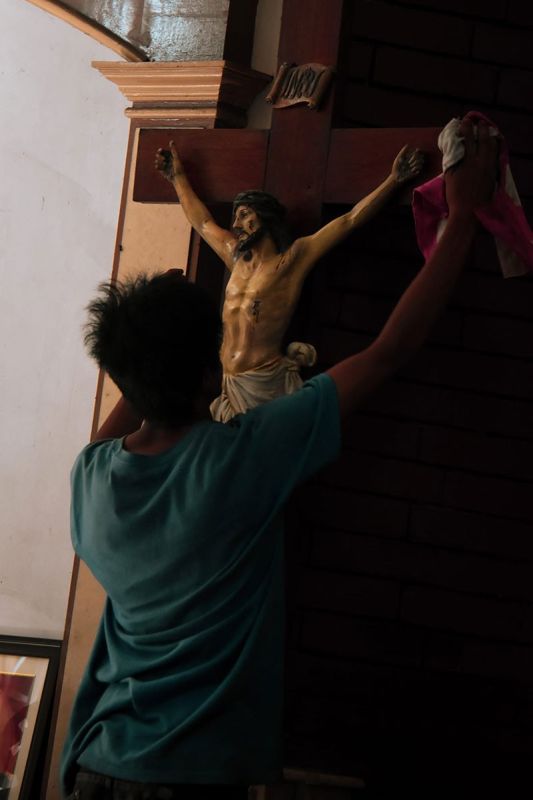 SOME parishes reportedly barred some churchgoers for the Visita Iglesia on Maundy Thursday, April 18, for bringing bags that are not allowed by the existing “No Backpack Policy”.

The policy, imposed by the Archdiocese of Davao, states that bringing backpacks, baggage, or boxes inside the church premises are prohibited, following the bombing incident at the Jolo Cathedral earlier this year.

Meanwhile, churchgoers with small handbags or purses need to undergo inspection before entering.

However, those bringing small bags were barred from entering Sta. Ana Church on Thursday evening.

Rose, not her real name, was not allowed to go inside with her shoulder bag.

According to Rose, the police assigned at Sta. Ana suddenly made the announcement without stating any reason.

Although Rose said she is not complaining, she said the parish should have made the announcement earlier, as not to bring inconvenience to other parishioners who came from other area.

Veronica, another parishioner who was barred from entering, also noticed the lack of security forces deployed at the Sta. Ana church.

Elton, a churchgoer, said authorities did not allow anyone bringing bags, regardless of kind, to enter the church.

He also said unlike other churches, it was the only church that he went to that has a stricter policy on bags.

Angel Sumagaysay, Public Safety and Security Command Center (PSSCC) deputy head, said on Saturday, April 20, although his office did not receive any complaints regarding the incident, he said that it is the discretion of the parishes on how the implement the policy.

Although Sumagaysay said it could have been better if the policy has a specific measurement, to avoid confusion.

Sumagaysay said despite the complaints, he is thankful that no untoward incidents happened during the Holy Week.

He then advised churchgoers to avoid bringing unnecessary items for their convenience.

“Wala namo ni gihimo para ma-hassle mo. Amo lang hangyo is gamay pasensya. Para mani sa safety sa tanan (This policy was create not to hassle any churchgoer but for the safety of everyone. Please be patient with us),” Sumagaysay said.