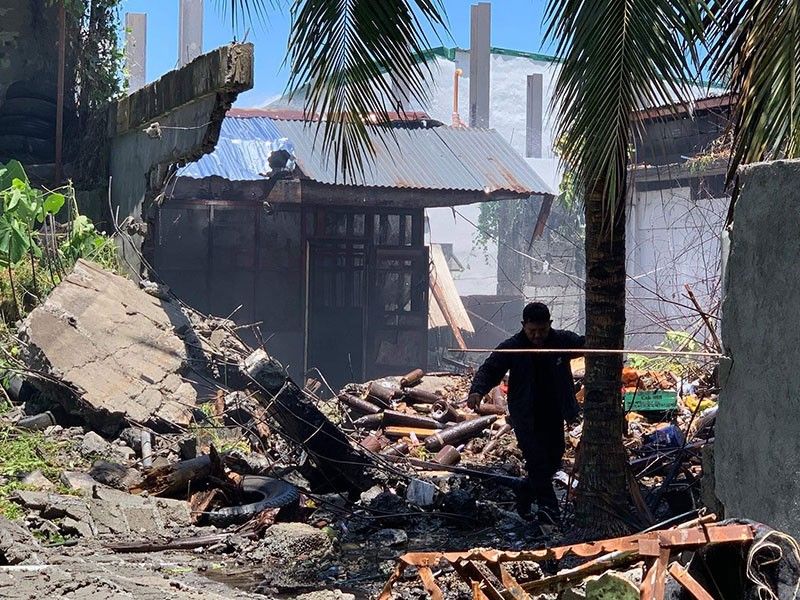 UNEXPLODED ordnances (UXO) were among those that exploded inside the Davao City Police Office (DCPO) on Black Saturday, April 20.

The explosion happened inside the Explosive Ordnance Division's (EOD) stockroom at the DCPO compound on San Pedro Street around 11:27 a.m. Personnel from the Bureau of Fire Protection (BFP)-Davao and the Central 911 immediately responded to the incident.

He said the EOD technical teams of the DCPO and the Police Regional Office-Davao are currently conducting post-blast investigation and containing and segregating residuals in the area.

“We already contained the area,” Tagum said, adding that no personnel and nearby residents were reportedly injured in the blast.

“These UXO include court evidence explosives, especially those confiscated from Maute members who were nabbed in the city last year,” Tagum said.

The police official said among those stocked inside were landmines confiscated from New People’s Army rebels. He could not determine, though, if the landmines also went off.

DCPO had been requesting for a separate storage area for these explosives, but the request is reportedly still on process.

Around 2 p.m., DCPO personnel were seen running outside the compound. Afterwards, BFP personnel and other auxiliary agencies were seen coming in to respond.

Tagum said they were just doing pre-emptive measures as smoke was detected at the site of the explosion.

An empty shell also pierced through the rooftop of a house in front of the DCPO.

The owner, who opted not to be named, said the empty shell landed in their comfort room while his son was doing laundry.

“We were already panicking when the incident happened. Luckily, my son was not hit by the empty shell,” the homeowner said while holding it during the interview.

Joyce Namo, a vendor selling buko (coconut) juice in front of the DCPO, saw black smoke coming from the compound during the explosion.

She said people nearby scampered to different directions during the incident.

“The 911 personnel even asked us to vacate the area for our safety, but during that time, the people were starting to come to the area,” she said.

“Makadungog man mi og buto-buto diraa. Pero mao na tong inig naa sila’y police drill sa sulod. Pero katong nahitabo ganiha, grabeng buto ato (We would hear small explosions from the barracks when they are having their drill. But this one was different, it was loud),”

Residents of Barangay 38-D beside the DCPO compound were also told to evacuate when the incident happened.