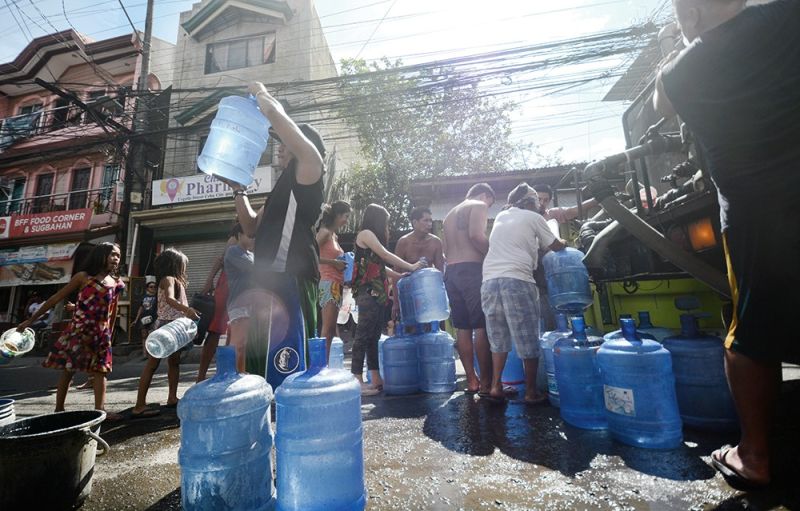 ADDITIONAL water impounding areas, mini dams and water cisterns in households and business establishments are being pushed by the Provincial Government and the Cebu City Government as long-term solutions to the water shortage problem.

While the City Government already has a local ordinance requiring homeowners and business establishments to have a rainwater storage facility, its compliance cannot be monitored due to the lack of personnel.

The Cebu City Environment and Natural Resources (CCENRO) is currently helping monitor the compliance in this crucial time, when water supply is dwindling due to the dry spell.

In some upland barangays in the city, the supply of potable water remains a major concern.

Because of the situation, the CCENRO will start implementing long-term solutions to address the problem on potable water supply in compliance with the United Nation’s Sustainable Development Goals (SDG) 6: Clean water and sanitation for all.

CCENRO chief Ma. Nida Cabrera said the City is not compliant with the targets under the SDG 6.

“We are not in compliance still with the targets of SDG 6 because there is too much pollution in our water resources. That’s why our office is addressing that. Right now, we have three main goals to address: water pollution, development of additional water sources and compliance with the Building Code when it comes to establishment of water catchment facilities,” she said.

Cabrera said that based on the records of the Metropolitan Cebu Water District (MCWD), around 70 percent of the city’s population has access to potable water supply.

Records from MCWD showed there are 100,889 service connections in the city, mostly in urban barangays.

Cabrera said the supply of potable water in the upland areas is still a concern due to the terrain and pollution of water sources there.

“In the mountain barangays, the source of water is mostly the springs but we cannot assure that it’s safe because even the upstream is also polluted due to the contamination brought by the use of chemicals and fertilizers for agriculture,” she said.

To address this, MCWD started to put up communal water areas where residents in the upland villages can access potable water.

Although there are private firms that supply water, Cabrera said MCWD is still the main supplier of potable water in the city.

CCENRO cannot say yet when the entire city will have access to potable water.

At present, around 80 percent of the city’s water supply is groundwater. That is why, Cabrera said, they have started to develop other sources.

Among the City’s proposed long-term solutions is to establish additional water impounding areas.

“I must admit that we are addressing the concern on the water supply on a short-term basis by providing hoses and drums, which is not sustainable. That is why we will start implementing the long-term solutions like having bigger impounding areas,” Cabrera said.

She added that the Buhisan Dam, which is the only water impounding area in the city, is heavily silted.

Cabrera said the construction of another water impounding facility is among the projects funded under the Annual Investment Plan this year.

City Ordinance 2103, or the Rainwater Conservation Ordinance of the City of Cebu, requires houses and buildings worth more than P250,000 to have a cistern in their building designed for rainwater storage.

“Right now, OBO can only check the building plan if the requirement was included but they cannot monitor the compliance due to limited manpower. That is why we are helping,” she said.

Cabrera said there is also a need to create a Cebu City Water Authority to monitor all developments regarding water supply and identify water sources in the city.

In a separate interview, Provincial Environment and Natural Resources Office (Penro) Chief Rodel Bontuyan said the Province hopes to provide every household with access to safe water in 10 years.

A 2015 report from the Cebu Provincial Planning and Development Office (PPDO) based on data from the Philippine Statistics Authority revealed that around 1.5 million people in rural and urban areas still have unimproved access to surface water.

According to PPDO officer Shemer Lev Pagusara, the service level or access to safe water is categorized in three levels.

Level I means residents get their supply directly from surface water sources without instruments, such as pipe connections, faucets or tap stands.

Pagusara said a Level I service is considered unsafe when the direct source of surface water is untreated. It is considered safe if the source is treated.

Level II pertains to having a water supply facility composed of a source, a reservoir, a piped distribution network with adequate treatment facility, and communal faucets. Around 14.90 percent, or around 240,850 people, in rural areas and around 20.34 percent, or 269,005 people, in urban areas were classified under Level II.

Pagasura said Level III refers to areas where each household has its own direct connection and tap stand.

“If we’re talking about supply year-round, 24 hours a day, there are still some areas that can’t access safe water,” Bontuyan said.

He said they cannot determine yet which areas still do not have access to safe water because they rely only on the reports of water associations, some of which are not organized.

Pagusara said there are still potential surface water sources in the towns of Tuburan, Alegria and Badian that can be developed to prevent the exploitation of ground water.

“It would be wise if LGUs craft legislations that would penalize illegal extraction of groundwater,” he added.

To regulate the extraction of groundwater, Bontuyan said they are pushing for the establishment of a Provincial Water Code.

At the time of the interview, the proposed measure was already submitted to the office of Provincial Board Member Thadeo Jovito Ouano, chairman of the committee on environmental conservation and natural resources.

Bontuyan said it took them two years to complete the draft of the Water Code.

If the proposed measure is approved, owners of houses and establishments will be required to build water cisterns, guide the Zoning Board in approving applications and protect Cebu’s bodies of water and sources of potable water.

For Bontuyan, problems on water shortage, especially during the dry season, can be easily addressed if the Province has more mini dams.

The problem, though, is that construction and operating expenses are too heavy for the Capitol to shoulder alone.

In the meantime, the Capitol, through the Penro, is holding tree-planting and tree-growing activities to store water in the aquifer.