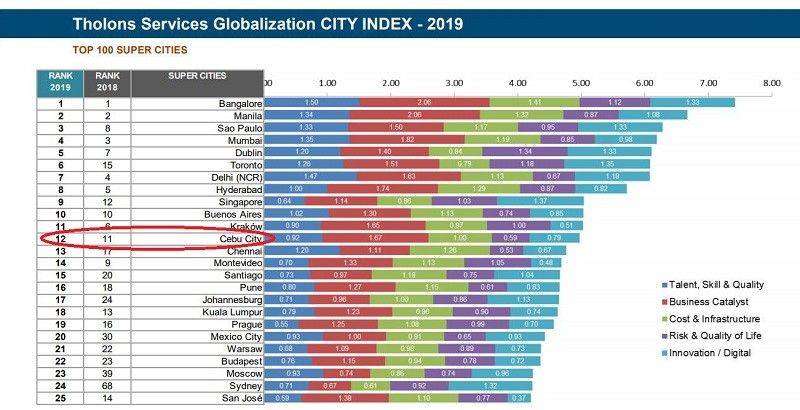 From its 11th ranking in 2018, Cebu City fell to the 12th spot in the Tholons Services Globalization Index (TSGI) 2019 released early this month.

“Unfortunately, we are not in the Top 10. The list is becoming more competitive, and other countries are catching up fast on digital adoption and the startup activities. Admittedly, we are behind in this area. We still have to catch up,” said Sa-a.

The TSGI, which is published annually, ranks the Top 100 “Super Cities” and Top 50 “Digital Nations.”

The 2019 index included new indicators such as the number of mobile phone/internet users, regulatory/compliance, digital investment and usage of artificial intelligence/cloud.

Only three Philippine cities are left in the top 100. Aside from Cebu, Manila has maintained its second spot in this year’s Top 10 Super Cities list while Davao fell to 95 from 75 last year. The cities of Sta. Rosa, Bacolod and Iloilo are no longer in the top 100.

The Philippines also fell three notches in the list of Top 50 Digital Nations, from ranking second in 2018 to fifth this year.

Sa-a cited the huge improvement of Singapore, which ranked 12th in 2018.

“Singapore has overtaken us because it has done a lot of digital transformation. They are very active in the startup ecosystem. In fact, last year, they mounted the 2018 Fintech Festival, the biggest event I have attended. This is one of the reasons it rose in the rankings,” he said.

It noted that countries and the cities are competing in the arena of digital transformation, with significant focus on creating an environment of digital skills, culture of innovation and entrepreneurship.

“Startups are synonymous with the best of innovation. It becomes imperative to study the startup ecosystem of a location. Technology startups are key to development of digital talent in a city,” it said.

Tholons said the number of startups in a city is fueled by government incentives to startups, availability of funds, mentors to guide, corporate accelerators and venture capitalists. Government’s role in fostering innovation and the startup ecosystem is vital.

A huge task is ahead for Cebu to catch up in the rankings.

He also cited the need for Cebu to have a functional one-stop shop where new employees can get their Social Security System number, taxpayer identification number, PhilHealth number and National Bureau of Investigation clearance.

Sa-a said that based on the latest list of Top 10 jobs in the gig economy, four out of the top five jobs will require coding or programming background. “We are preparing our future talents, not only for the higher value services, but also for the future jobs.”

He said the industry should explore other forms of outsourcing like back office operations, non-voice, information technology, shared services, health information management, finance and accounting, banking, engineering and new products and services from startup communities.