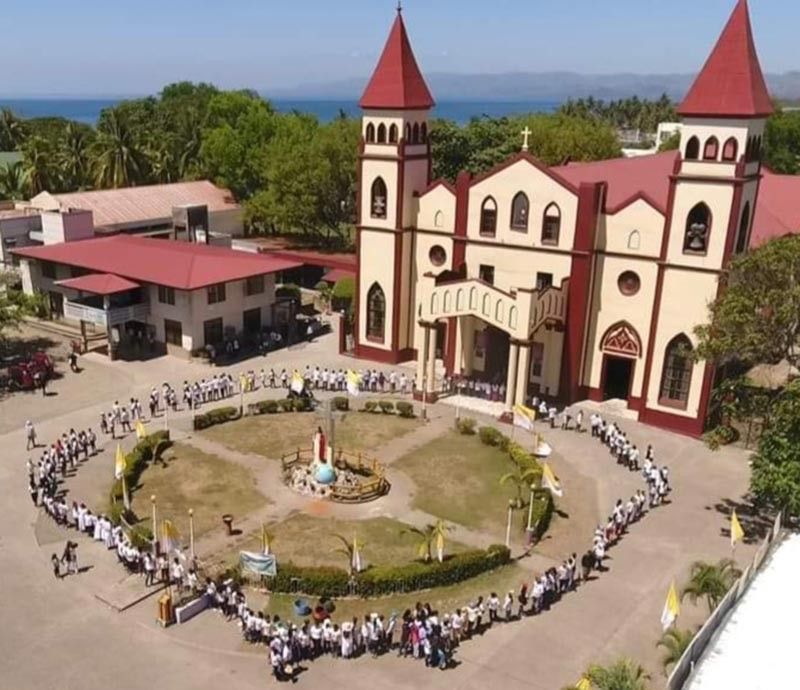 BACOLOD. This the aerial shot of the human chains launched in the Diocese of San Carlos Borromeo Cathedral in San Carlos City which was simultaneously done in the Dioceses from Manapla to La Libertad in Negros Oriental on April 22, opposing the entry of the coal-fired power plant as proposed by San Miguel Corporation. (Photo by Ramoncito “C2y” Taño)

SAN CARLOS CITY -- Anti-coal advocates led by the Dioceses of San Carlos, Kabankalan, Bacolod and Dumaguete have pinned their hopes on San Miguel Corporation vice president, vice chairman and chief operating officer Ramon Ang, whose company served as the main proponent of a 300-megawatt coal-fired power plant to be located in Barangays Palampas and Punaw in this city.

Rev. From. Edwin Laude, pastoral director of San Carlos Borromeo Parish Cathedral in this city, and Rodne Galicia, lead convenor of Living Laudatu Si , Phils., organized the launching of the human chains in time for the celebration of the Earth Day, involving almost 7,000 people from this diocese and dioceses of Manapla to La Libertad, Negros Oriental reiterating their opposition to the coal-fired power plant which they considered as a dirty source of power that will have serious impact on the people’s health and the environment.

Although, the San Carlos City officials have favored the entry of coal plant in their city while former mayor and now Vice Governor Eugenio Jose “Bong” Lacson maintained an open stand on the proposed project, the advocates will continue to bring up the issue as a vital stance to oppose the realization of the project.

Galicia said, “This is a show of force that the faithful community are aware and are already acting on the issues of the environment. We are very happy and glad that the Diocese of San Carlos has shown their resolve and commitment to address the issues on the environment. Bishop Gerardo Alminaza, Bishop of San Carlos has been leading the cause not only in San Carlos City but the whole Negros island. All the four bishops in the Negros island are united to heed the cry of the earth and the cry of the poor.”

He said that Earth day is every day.

They wished that the people of Negros including the local and provincial officials of the province will really stand up and be proud that Negros island is the renewable capital of the Philippines. If they allow coal-fired power plant in Negros, that record will be tarnished and we are not happy with that. We will be proud to say that we followed the parish global agreement to reduce carbon emission and that Negros island is one of the best models in the whole world that actually promote renewable energy.

Meanwhile, Rev. Fr. Laude said they have 45 parishes from Manapla in the North to La Libertad in the South.

The human chains started from 8 a.m. to 8:30 a.m. yesterday in front of the dioceses which participated in this cause.

This is not just our cause but the cause of everybody. We live in the same earth, the same air that we breathe and water that we drink, he said.

They are hoping that they could stop the entry of the coal-fired power plant.

“We should not stop hoping otherwise it can make us immobile if we stop hoping. We hope and pray that this activity and succeeding activities will be able to conscienticize our leaders who are supposed to be the decision makers to listen to the people and not to pursue the construction of the coal-fired power plant,” he said.

The bishop, in his Holy Week homily has enjoined the parishioners not to vote those who support or favor the coal-fired power plant, he said.

San Carlos City is on a different context as most of the people here are very dependent on the Local Government Unit and the politicians.

They cannot free themselves from that as they are relying on their livelihood and employment on the politicians.

“We are calling on them but it depends on how they respond to the call of the bishop,” he said.