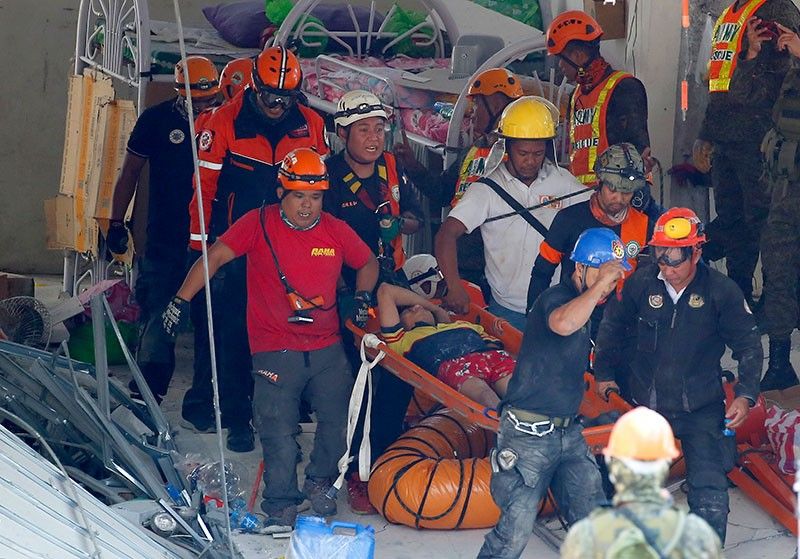 PAMPANGA. Rescuers carry an earthquake survivor after being pulled out from the rubble of a commercial building following a 6.1 magnitude earthquake in Porac township, Pampanga province, north of Manila, Philippines, Tuesday, April 23, 2019. The strong earthquake struck the northern Philippines Monday trapping some people in a collapsed building, damaged an airport terminal and knocked out power in at least one province, officials said. (AP Photo)

MORE bodies were recovered from the collapsed building in Porac, Pampanga, raising the death toll from the April 22 earthquake in Central Luzon to 11 as of Tuesday noon, April 23, provincial officials said.

The National Disaster Risk Reduction and Management Council (NDRRMC), however, said only seven fatalities have been confirmed.

NDRRMC spokesperson Edgar Posadas, in a telephone interview, said seven people were killed, 81 were injured and 24 remained missing as of Tuesday morning.

He said rescue, search and retrieval operations is still ongoing at the Chuzon Supermarket. The NDRRMC was placed on Blue alert to ensure the availability of personnel needed for disaster response operations.

Posadas said a total of 32 structures were affected by the tremor in the National Capital Region (NCR) and Central Luzon.

Porac Mayor Condralito dela Cruz said the bodies of four victims were pulled overnight from the pile of concrete, twisted metal and wood at what used to be Chuzon Supermarket.

Three other people in Porac died due to collapsed house walls.

Red Cross volunteers, army troops, police and villagers used four cranes, crow bars and sniffer dogs to look for the missing, some of whom were still yelling for help Monday night.

Authorities inserted a large orange tube into the rubble to blow in oxygen in the hope of helping people still pinned there to breathe. On Tuesday morning, rescuers pulled out a man alive, sparking cheers and applause.

"We're all very happy, many clapped their hands in relief because we're still finding survivors after several hours," Porac Councilor Maynard Lapid told The Associated Press by telephone from the scene, adding another victim was expected to be pulled out alive soon.

The quake, plotted near Castillejos, Zambales at a depth of 10 kilometers, damaged many houses, concrete roads, bridges, Roman Catholic churches and an international airport terminal at Clark Freeport, a former American air base, in Pampanga. Another child died in nearby Zambales province, officials said.

At least 24 people remained missing in the rice-growing agricultural region, mostly in the rubble of the collapsed supermarket in Porac, while 81 others were injured, according to the government's disaster-response agency.

The four-story building housing the supermarket crashed down when the quake shook Pampanga as well as several other provinces and the capital, Manila, on the main northern island of Luzon.

More than 400 aftershocks have been recorded, mostly unfelt.

The U.S. Geological Survey's preliminary estimate is that more than 49 million people were exposed to some shaking from the earthquake, with more than 14 million people likely to feel moderate shaking or more.

Clark International Airport was closed temporarily because of damaged check-in counters, ceilings and parts of the departure area, airport official Jaime Melo said, adding that seven people were slightly injured and more than 100 flights were canceled.

In Manila, thousands of office workers dashed out of buildings in panic, some wearing hard hats. Residents ran out of houses as the ground shook. Many described the ground movement like sea waves.

One of the world's most disaster-prone countries, the Philippines has frequent earthquakes and volcanic eruptions because it lies on the so-called Pacific "Ring of Fire," a seismically active arc of volcanos and fault lines in the Pacific Basin.