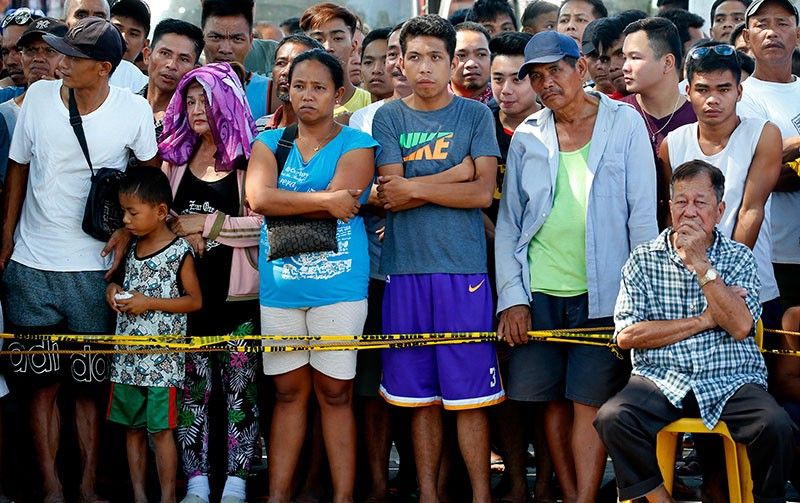 PAMPANGA. Residents watch as rescuers continue to search for survivors following Monday's 6.1 magnitude earthquake that caused the collapse of a commercial building in Porac township, Pampanga province, north of Manila, Philippines, Tuesday, April 23, 2019. The strong earthquake struck the northern Philippines Monday trapping some people in a collapsed building, damaged an airport terminal and knocked out power in at least one province, officials said. (AP Photo)

CITY OF SAN FERNANDO - The town of Porac has been declared under state of calamity, following the magnitude 6.1 earthquake that jolted Pampanga on Monday afternoon, leaving 14 dead as of press time.

In a statement, Office of the Civil Defense Executive Director Ricardo Jalad said five were killed at the collapsed building of the Chuzon Supermarket in Porac, seven were from different barangays of Porac, two in Lubao, one in Angeles City and one in San Marcelino, Zambales

The agency also said 81 persons were injured while 14 remained missing as of Tuesday afternoon.

The NDRRMC, however, said the figures were being verified.

The OCD, which serves as the implementing arm of the NDRRMC, also said 29 structures and buildings were damaged by the quake, which struck near Castillejos, Zambales at 5:11 p.m. Monday.

He said a total of 155 Bureau of Fire Protection (BFP) with rescue fire trucks and ambulance in Pampanga assisted in rescue and response operations, particularly at the Chuzon supermarket.

The NDRRMC said at least 120 families have evacuated following a landslide in Mt. Bimmukel in San Marcelino.

It said the Department of Social Welfare and Development has extended assistance to the families affected.

Meanwhile, Pampanga Vice Governor Dennis Pineda, who is also the vice chair of the Pampanga Disaster Risk Reduction and Management Office, said the Provincial Board has placed the province under a state of calamity to enable the people to immediately rebuild.

He said he also asked the mayors of Apalit, Sto. Tomas and Guagua towns to order the temporary shutdown of Chuzon Supermarket branches in their areas to assess the structural integrity of their buildings. (SunStar Philippines)