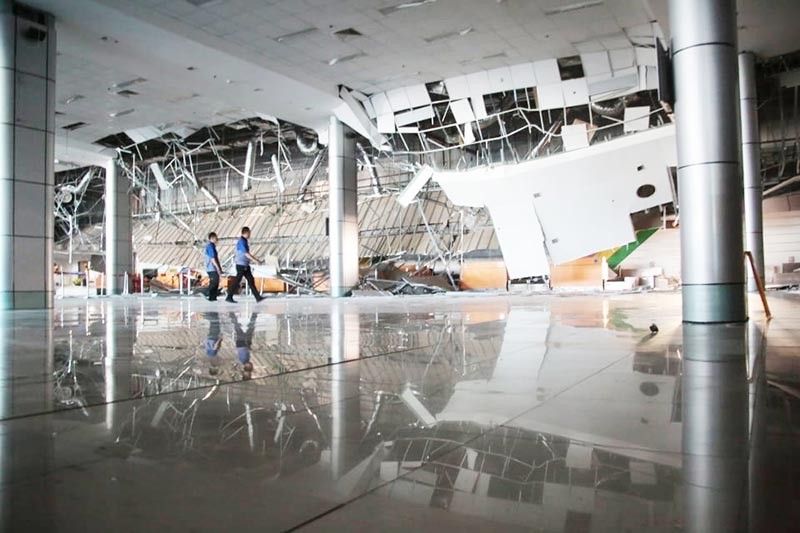 PAMPANGA. Part of the ceiling of the Clark International Airport passenger terminal building collapsed after Monday's 6.1 magnitude earthquake that rocked a big part of Luzon. (Photo courtesy of CIAC-CCO)

MAJOR roads and bridges were closed to traffic after these were damaged by the magnitude 6.1 earthquake that hit the province on Monday afternoon, April 22.

The FVR Megadike access roads from Dolores to Calibutbut/Maliwalo in the City of San Fernando was closed to all types of vehicles as of Tuesday noon, after the facility sustained cracks.

The FVR Megadike, built during the term of former President Fidel V. Ramos, is considered an alternate access road from Bacolor town to San Fernando, Porac town and Angeles City.

Personnel of the Department of Public Works and Highways (DPWH) started conducting repair and rehabilitation on the road Tuesday noon.

The Consuelo Bridge in Floridablanca town was also not passable as of Tuesday noon after a major crack was seen at its foundation and approach.

Floridablanca Mayor Darwin Manalansan said the Consuelo Bridge is a vital infrastructure as it connects their town to Zambales, particularly Olongapo, and other areas in Northern Luzon.

Manalansan also disclosed that he ordered the temporary halting of quarry operations in his town to ensure the safety and security of the public, especially uarry workers.

The Sasmuan-Lubao Bridge in Lubao town, meanwhile, was only passable to light vehicles as of Tuesday noon due to visible damage caused by the earthquake. Half of the carriageway's embankment was scoured. The estimated length of damage is approximately 100 meters.

DPWH Secretary Mark Villar, who inspected the bridge Tuesday morning, said all affected roads and bridges will undergo assessment to check on the extent of damage.

Villar said the agency will fast-track the repair and rehabilitation of the infrastructure facilities to make them available to traffic as early as possible.

Villar, meanwhile, said the agency has yet to determine the cost of damage caused by the earthquake as DPWH personnel are still doing the rounds in the affected areas.

This was after several public and private establishments, including schools, churches, and residential houses also reported damage caused by the earthquake.

“Based on initial reports, Pampanga actually ang may pinakamaraming damages since wala naman kaming na-receive na major reports from other provinces but of course, we will still be verifying this,” Villar said.

The entire Pampanga province was plunged into a massive power outage after the quake, as the National Grid Corporation of the Philippines (NGCP) tried to restore most service lines.

The Department of Energy (DOE) has activated the Task Force Energy Resiliency (TFER) in light of the tremor.

Initial reports from the NGCP indicate that the earthquake also caused power interruptions in Pangasinan, Pampanga, La Union, and Bataan. The provinces of Quezon, Batangas, Camarines Sur, and Sorsogon were also affected but have already been restored.

As of 11:00 p.m. Tuesday, NGCP has restored power transmission services to the entire franchise areas of PELCO III and SFELAPCO, and parts of AEC (parts of Angeles City, Pampanga). As of 11:40PM, April 22, NGCP has yet to restore power for PELCO 2 which services the major towns hit by the quake.

The quake, centered northeast of Castillejos, Zambales, also caused serious damage to Porac Church and the Clark International Airport, which was closed for 24 hours after the tremor.

The shallow tremor, with a depth of focus of 12 kilometers, was felt strongly in Central Luzon and Metro Manila, sending people out of their buildings and their homes, when it struck at 5:11 p.m. Monday.

The Philippine Institute of Volcanology and Seismology (Phivolcs) reported instrumental intensities were felt from Ilocos Sur down to Camarines Norte.