When a dream refuses to die 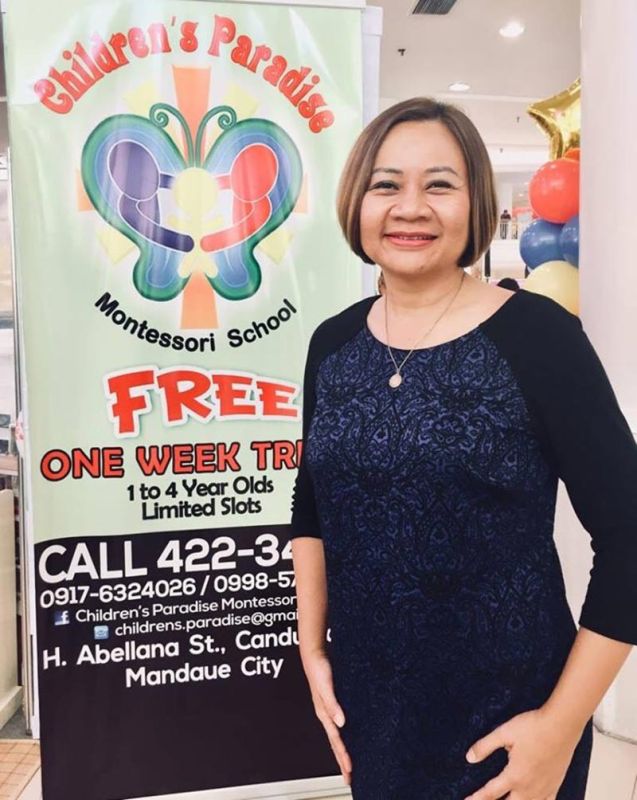 A PAINFUL childhood experience inspired entrepreneur Marivic Bathan to leave her high-paying job in a multinational company to realize her desire of running a school for children.

Bathan grew up in a family of educators. She said when one grows up in a household with parents in the teaching profession, he or she will quickly learn the importance of education.

Her strong affection for children was also a result of her task looking after her siblings during their childhood years. Bathan is the second child in a brood of five.

“My story is an innate calling at a young age,” she said. “But mine did not come easy.”

Bathan went through a “soul searching” season in life prior to opening Children’s Paradise Montessori School.

But while working, Bathan took a part-time job as a college professor teaching accountancy subjects at the Cebu Institute of Technology-University and University of San Carlos.

Her three years working in a private firm exposed her to dealing with multinational companies. It also gave her the opportunity to travel around the country. However, she reached a point where she wanted to heed her heart’s calling.

“I got bored with my job. Plus, the desire to open a school had intensified,” she said.

After resigning, Bathan embraced teaching full-time. She took that one year off work as an opportunity to think deeper on how she was going to realize her dream.

A career guidance course in college led Bathan to know more about the Montessori teaching method. She said she got interested with teaching all the more when a fellow teacher introduced the various opportunities available.

After a year of teaching, Bathan went back to work after a multinational company continued to seek her out.

She initially declined the job offered by The Coca Cola Corp. but eventually joined as a finance manager.

She was with the company for five years, but she continued to think about opening a Montessori school one day.

“While working, I also dedicated some time to research more about the Montessori method. The desire never left me,” said Bathan.

In 2004, she made a bold decision to finally leave the corporate world.

Bathan spent P3.5 million to construct the school. From 13 students, the population grew to 150 with 25 teachers.

I worked for Punongbayan & Araullo (P&A) for three years as an auditor. I traveled all over the country to meet clients. Fortunately, one of them was The Coca Cola Corp., which later on courted me to join them.

Since most of my work time was in Manila, I had the opportunity to attend a seminar on reparenting a child. It opened my eyes to how crucial the early stages of childhood are to the quality of life the person will have later on. I learned that if you are able to nurture well the childhood years of a child, most likely, they’ll become a healthy and happy person.

Unfortunately, I experienced a painful past when I was young. But with that pain comes the gift—the desire to somehow protect the early formative years of children.

I wrestled for a time on whether I should push through with my dream of opening a school or not. I have constantly asked God whether He agreed with this desire.

When I joined The Coco-Cola Corp., this dream never left me. I spent time learning about the Montessori teaching method and the many ways of running a school.

In 2001, during my fourth year in the company, one of my siblings gave birth to a premature child, one that had cerebral palsy. Looking at her, I wondered who’s gonna take care of her? So I started discerning again because at that time, I was at the peak of my success in the corporate world.

It actually took me a year to finally decide to just let go and let God take care of me as I realized this dream.

Prior to leaving the corporate life, I joined a pilgrimage to the Holy Land. This was during the 9/11 attack. I was with the group of Bo Sanchez, who for the first time, brought their first child with them on that trip.

For me, that was a clear sign from God that I should take a leap of faith and open the school I long desired. It was like everywhere I went, God always reminded me of my purpose. I finally decided to let go of the perks, the comfort and privilege of working for a multinational company, the high pay, everything that I used to enjoy.

When I told the company about my plans, they initially declined to let go of me. Fortunately, one of my bosses understood my situation, and even helped me talk to the top management. I was given a better separation package, which I later on used to build the school.

I was driven by the desire to help kids have a fun and loving environment while growing up, and the school is the perfect platform that could unleash the potentials of children. The school is the starting point for them to discover their God-given talents or abilities.

I was also inspired by the fact that if we are able to build a happy and loving environment for children, they will end up becoming better individuals in the future.

Besides the technical trainings I got working in the corporate world, I also took graduate studies in Montessori education. But being in the education business is a life-long learning. You learn from the teachers, as well as from the students.

Life provides countless reasons and occasions to abandon our deepest desire. But I’m happy I never resorted to that.

I brought my heart along this journey, and it was one of the best things that ever happened to me. My journey of opening the school brought healing to my past. I was in a way, freed.

One of the challenges I encountered was how to keep the teachers during the first few years of school operation. I was too aggressive to see results that I forgot about taking into consideration the capacity of the teachers.

Coming from a fast-paced corporate world, I was trained to think and act fast; I forgot that every person has a different pace of growth. That experience taught me to slow down a bit.

I also struggled in growing the student population as well as in maintaining the cash flow. The Montessori method wasn’t that popular at the time, so it needed a lot of awareness campaigns among parents.

With this journey, I realized that being in business is a service. If these were all for myself, I would have long given up this dream and gone back to the comforts of working in a high-paying job.

But making dreams happen entails a lot of faith and hard work. What encourages me now is that this journey is making me a grounded person, and one that has made me find my true purpose.