Simmons, Embiid usher 76ers past Nets and into 2nd round 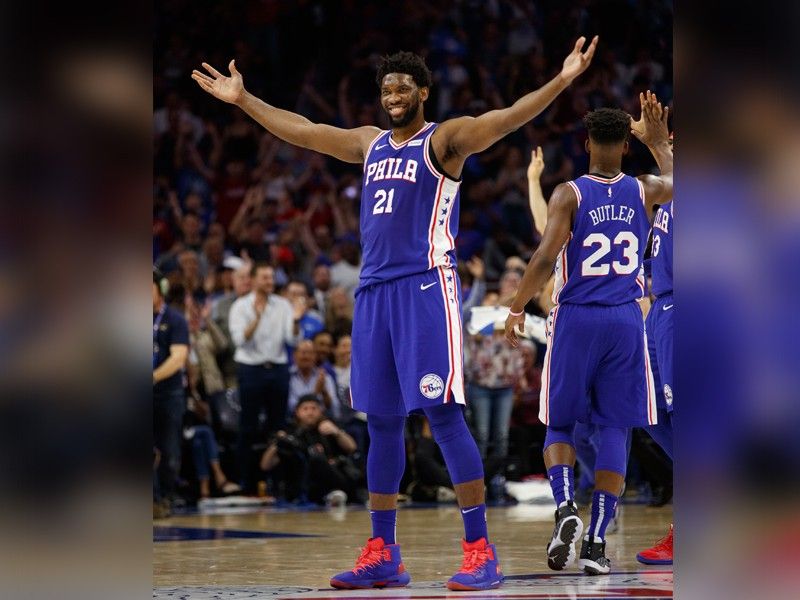 Philadelphia 76ers' Joel Embiid, of Cameroon, reacts to his basket during the first half in Game 5 of a first-round NBA basketball playoff series against the Brooklyn Nets, Tuesday, April 23, 2019, in Philadelphia. (AP)

PHILADELPHIA — Ben Simmons thumped his chest after a big dunk , Joel Embiid pointed toward an overmatched defender on a slam of his own, and the Philadelphia 76ers flexed their offensive muscle from the opening tip to beat the Brooklyn Nets 120-100 on Tuesday night and close out their Eastern Conference playoff series in five games.

Any late arrivals missed the defining moments of the game from a jovial Sixers team that enjoyed toying with the sickly Nets.

The Sixers stunned the Nets with a 14-0 run in front of the loudest and rowdiest packed house of the season.

Embiid again shook off a bad left knee and had six points and five rebounds in the first two minutes to chants of "MVP!" The Nets later trailed 20-2, and Simmons put an exclamation point on the stunning first quarter when he drove the paint and used a right-handed jam to make it 32-12 — with a thump of his chest for emphasis.

Brooklyn's Jared Dudley was soundly booed during pregame introductions and each time he touched the ball in the first. Dudley had stirred trouble when he said Simmons was "average" in the half-court. Dudley bumped Embiid in Game 4, triggering a skirmish with Jimmy Butler that spilled into the stands. Dudley heard "Dudley sucks!" chants from opening tipoff and got a view of this rout from the bench in the second half. He flashed a few smiles in the waning moments, his time as a playoff name over.

The teams tangled again in the final two minutes, and the deep reserves had to be separated. Sixers mascot Franklin ran out wearing oversized gold boxing gloves to bring a dose of levity to the ruckus.

Embiid got the last laugh in the second quarter with a baseline dunk over Rondae Hollis-Jefferson and pointed at the hapless defender. Embiid was hit with a technical but by then, who cared? Embiid buried a 3 from the top of the arc that made it 41-17 and about blew the roof off the arena. Sixers general manager Elton Brand, who sits in the first row of the press seating, had his eyes locked on the scoreboard for each replay of the big man's 3.

Embiid had 23 points and 13 rebounds, Simmons had 13 points and no starter played more than 27 minutes in a game that could have been called off after the first quarter.

Hollis-Jefferson scored 21 points for the Nets, who head into the offseason after their first playoff series since 2015.

"We haven't gone through this. I'm dying to see," Nets coach Kenny Atkinson said before the game. "My guess is we come out fighting like lions."

Brand is as much to credit for the Sixers' success as anyone, using his rookie season as GM to orchestrate trades for Butler and Tobias Harris that kept Philly humming along in a 51-win season. But even before the trades, the Sixers were expected to make it this far in the playoffs. They did last season and were knocked out by Boston in the East semis in five games. The midseason trades for Harris and Butler were expected to push the Sixers to at least the conference final. Coach Brett Brown has said the goal is to play in the NBA Finals.

Brown understood before the game the Sixers still needed to shape up to consider the series a success.

"If we want to close out this series, we have to do better," he said.

The Sixers did, and now the Raptors are waiting for what should be a more competitive series.

Kyle Lowry scored 14 points as the Raptors finished off the Magic with ease, bouncing back from a Game 1 defeat to win by double-digits in three of the next four. Toronto led by as many as 37 in the clincher, their biggest-ever margin in a playoff game.

It's the fourth straight year the Raptors have reached the second round. (AP)