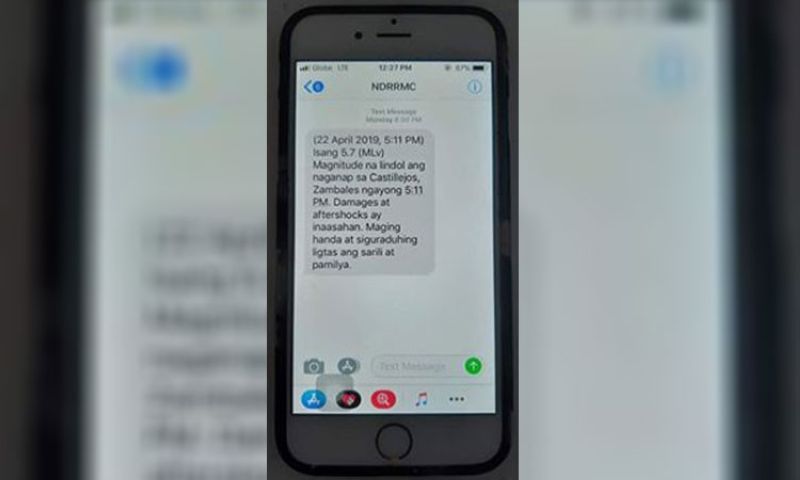 MANILA. This is how a genuine text message from NDRRMC looks like. (SunStar Philippines Photo)

AN ADVISORY through text message about a supposed magnitude 8.0 earthquake is a hoax.

The National Disaster Risk Reduction and Management Council (NDRRMC) said it has not issued any such advisory.

Civil defense officials cautioned the public against forwarding this.

(OCD-NDRRMC has learned that text messages about a supposed magnitude 8.0 earthquake are being circulated. We would like to stress that this is a hoax. There is no truth to it.)

OCD refers to the Office of Civil Defense, the implementing arm of the NDRRMC.

The agency said it sends out advisories using the “NDRRMC” account only.

(We urge the public not to like nor forward these fake text messages. We urge everybody to stay alert against any threat or disaster.)

The Philippine Institute of Volcanology and Seismology (Phivolcs) earlier reiterated that there is no technology that can detect or predict an earthquake.

Phivolcs Director Renato Solidum has also reiterated that there is no pattern to the location of earthquakes.

Strong tectonic earthquakes struck Luzon and the Visayas within 24 hours of each other.

On Monday, at 5:11 p.m., a magnitude 6.1 tectonic earthquake hit near the municipality of Castillejos in Zambales.

Provinces nearby such as Pampanga and Bataan and other areas in Central Luzon and NCR were also affected.

At least 16 people were killed, mostly in Pampanga where a four-story commercial building collapsed.

At 1:37 p.m. Tuesday, a magnitude 6.5 earthquake occurred near San Julian, Eastern Samar. This was felt in other Visayas islands, including Cebu.

As of 6 a.m. of Wednesday, April 24, the NDRRMC said no fatalities were recorded in the affected provinces, but 10 people were hurt and 35 structures incurred minor damage.

NDRRMC spokesperson Edgar Posadas said the Eastern Visayas Office of the Civil Defense was placed on red alert to ensure the availability of personnel for an unhampered coordination and information dissemination.

He said the Disaster Risk Reduction and Management Offices in the provinces affected by the earthquakes are on blue alert.

Posadas said augmentation from the Armed Forces of the Philippines, Philippine National Police, Philippine Coast guard and Bureau of Fire Protection were activated and deployed to take part in the monitoring of situation on the ground. (SunStar Philippines)